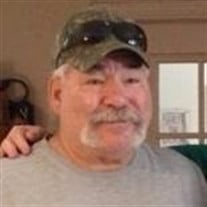 Mr. George Michael Milatovich, 68 of Navasota passed away Wednesday, November 22nd at Grimes St. Joseph Hospital in Navasota. Visitation with family and friends will be held from 5:00 pm - 7:00 pm. Wednesday, November 29th at Nobles Funeral Chapel. A celebration of his life will be at 1:00pm, Thursday, November 30th, also at the funeral home with interment following in Oakland Cemetery. Rev. Kyle Childress will officiate. Arrangements are under the direction of Nobles Funeral Chapel. George was born in Houston, Texas on July 6, 1949 to George Nicholas and Betty Jane (Prescott) Milatovich. He worked in the oilfield for over 30 years, which at one point led him to Wyoming where he lived and worked for five years. He loved hunting and spending time outdoors, enjoying the cold weather up north. He later retired to Navasota so he could be closer to the family and friends he loved dearly. He enjoyed his retired life, going to breakfast every morning with his brother, Gaylon and the new friends he met. One of his hobbies was collecting firearms and he spent a great deal of time at Circle Star Firearms, visiting and discussing their newest inventory. George is survived by his daughter and son-in-law, Wenda and Roger Blackman of Caldwell; son and daughter-in-law Alan and Wendi Smith of Dayton; sister Deborah Prescott of Abilene; brothers and sisters-in-law Gaylon and Debbie Milatovich of Navasota; Shields Prescott, Gary and Jean Prescott and Michael and Carolyn Prescott; grandchildren Haley, Lorin, and Garet Milatovich and great-grandchild Koy Franklin. Serving as pallbearers are Dominic Milatovich of Anderson, Garet Milatovich of Navasota, Logan Williams of Tomball, Alan Smith of Dayton, Shane Prescott of Navasota and Jason Phillips of Amarillo. He was preceded in death by his father, George Milatovich, mother Betty Prescott, step-father Shields Prescott and son Greg Milatovich. You are invited to leave kind words and fond memories at www.noblesfuneral.com.

The family of Mr. George Michael Milatovich created this Life Tributes page to make it easy to share your memories.

Send flowers to the Milatovich family.