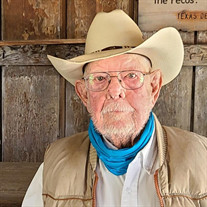 Corky Huddleston passed away peacefully Tuesday, February 16, 2021, in College Station, Texas. He was born February 25, 1930 in Iraan, Texas where he resided for most of his life until relocating to Navasota, Texas in 1991. He is survived by his nephews and niece; Peter Huddleston, W. Paul Huddleston, and Lisa Currie, and their spouses Kathy, Dori, and Peter. He was also loved by his eight great-nieces and nephews, Mitchell, Jordan, Will, Emily, Katherine, Joseph, Claire, and Kate and 6 great-grand-nieces and nephews, Grayson, Logan, William, Aubrey, Harper and Olivia. He was preceded in death by his parents, Acie Ray and Jewel Charity Dukes Huddleston and his brothers Kenneth Ray Huddleston and B.P. (Pete) Huddleston. Corky attended Texas A&M University before joining the United Stated Army as a member of the 180th infantry where he encountered significant combat during the Korean conflict. At the end of his service, he returned to west Texas and was employed by Marathon Oil Company for his entire working career. Corky was a multi-talented individual who delighted in restoring and collecting antique automobiles, playing guitar, traveling and visiting with his many friends from all around the world, remaining independent and active right up until his recent passing. Maintaining his life-long love of travel, he embarked on a train trip through Canada on the Rocky Mountain Express, stopping in Vancouver, Kamloops, Banff, and Calgary, in August of 2019. For his 90th birthday in February of 2020, he threw a party attended by over 120 of his friends and family. He even traveled back to his hometown of Iraan on a several-day road trip through West Texas in October of last year. Corky is remembered fondly by the countless people whose lives he touched in his 90+ years with us. A memorial service for friends and family will be held on Friday, February 26 at 3pm at Double H Ranch at 4590 Farm to Market Rd 2 Navasota, TX 77868. In lieu of flowers please make donations to Texas A&M University or the charity of your choice.

Corky Huddleston passed away peacefully Tuesday, February 16, 2021, in College Station, Texas. He was born February 25, 1930 in Iraan, Texas where he resided for most of his life until relocating to Navasota, Texas in 1991. He is survived by... View Obituary & Service Information

The family of Mr. Gerald Kermit Huddleston created this Life Tributes page to make it easy to share your memories.

Send flowers to the Huddleston family.