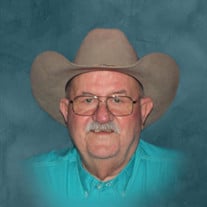 Gilbert Ray Druckhammer, 65, passed away peacefully on Wednesday, March 25th at Hospice Brazos Valley Inpatient Facility in Bryan, Texas. A celebration of his life has been scheduled for 4:30 pm, Saturday, April 17th at the Navasota Evening Lions Club Building located next to the Grimes County Expo and Fairgrounds, 5220 FM 3455, Navasota, Texas. Gilbert was born on July 18, 1954 in Navasota, Texas to Gilbert William and Mildred (Peters) Druckhammer. He was baptized and confirmed into the Lutheran faith at Trinity Lutheran Church of Navasota, Texas. He was a 1972 graduate of Navasota High School. On February 16, 1974 Gilbert married the love of his life, Glenda Kay Toman. Together they raised two children: Mandy Renee and Jason Wade. Gilbert was a loyal employee of Mid-South Synergy for 35 year until his retirement in 2013. He was also a dedicated member of the Navasota Evening Lions Club for the last 11 years. Throughout his life, Gilbert found happiness with his family and those he considered family. He loved time at the deer lease, the “Singleton Hilton” where he was known as Bubba Ray. However, the one place that held his heart the most was Port O’ Connor, Gilbert and Glenda’s second home. Gilbert Ray never met a stranger, and always wore a smile. Gilbert is survived by his wife of 46 years, Glenda; daughter Mandy Bailey and husband Rob of Richmond, Texas; son Jason Druckhammer and wife Anne of Navasota; grandchildren Caitlyn Druckhammer and Josh Sechelski of Navasota; Erin Bailey of Richmond, Abbi and Michael Slaton of Norman, Oklahoma and Chace Mitchell of Yantis, Texas; and his three precious great grandchildren, Millie Sechelski, Cutter Sechelski and Cameron Slaton. Along with sister-in-laws, brother-in-laws, cousins and many more he considered family. In lieu of flowers, memorial donations can be made to: Navasota Evening Lions Club, Trinity Lutheran Church or the American Cancer Society. You are invited to leave kind words and fond memories at www.noblesfuneral.com.

Gilbert Ray Druckhammer, 65, passed away peacefully on Wednesday, March 25th at Hospice Brazos Valley Inpatient Facility in Bryan, Texas. A celebration of his life has been scheduled for 4:30 pm, Saturday, April 17th at the Navasota Evening... View Obituary & Service Information

The family of Mr. Gilbert Ray Druckhammer created this Life Tributes page to make it easy to share your memories.

Send flowers to the Druckhammer family.