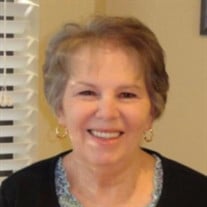 Mrs. Glenda Diana Lawrence, 72, of Navasota, passed away Thursday, September 30th, at St. Joseph Manor in Bryan. Visitation with family and friends will be held Monday, October 4th from 5:00 – 7:00 PM at Nobles Funeral Chapel followed by a Parish Rosary at 7:00 PM. Funeral services will be celebrated Tuesday, October 5th, at 2:00 PM at the funeral home with Deacon Steve Medina officiating. Interment will follow in Oakland Cemetery. Arrangements are under the direction of Nobles Funeral Chapel. Glenda was born in Pasadena on June 7, 1949. She and her 4 siblings were raised by their loving parents Willie Edward & Mary Jonell Odom primarily in Brenham, Texas. Glenda met and married the love of her life John in 1967, having a double wedding with her best friend and sister Linda & husband James. Glenda and John, just last week celebrated their 54th wedding anniversary on September 23rd. Glenda was a dedicated wife, never wanting anything more than the unconditional love she and John shared. Glenda & John raised their 2 sons John Jr. & Chuck in Navasota where the family business was located for over 30 years. As a Homemaker Glenda was known for her cooking & care for her family. She was always supportive and involved in her children’s school and extra-curricular activities, shuttling them to and from events. She helped in teaching them to hunt & fish, even helping them in the processing of the game they harvested. Glenda was even know to throw on a baseball glove to play catch with little John till his dad could get home from work. She was most proud of her family, Her Husband, Her Children & Spouses and Grandchildren. She truly loved every one of them. Whether it be the job or trade they performed, their personal achievements, the arrival or the newest grandchild or newly arrived great grandson, Glenda never missed an opportunity to let whoever she was talking with, know how proud she was of them. Her family was truly her whole life. Later in life, as Glenda’s mobility and health declined, nothing made her happier than a visit or phone call from the family and friends she loved so much. She was preceded in death by her parents, Willie & Mary Odom; and sisters, Barbara Merchant and Linda Hurst. Glenda is survived by her husband John H. Lawrence of Navasota; sons and daughters-in-law, John H. Lawrence, Jr & Susan of Montgomery and Chuck Lawrence & Kacie of Navasota; brother and sister-in-law Billy & Eva Odom of Brenham; sister Connie Sears of Livingston; grandchildren, Evan Lawrence and wife Makenzi, Paige Lawrence and Chucky Lawrence; and great-grandson Kohen. Serving as pallbearers are Michael Lawrence, Brian Lawrence, William Odom, Clint Hurst, Taylor Hurst, Evan Lawrence, and Chucky Lawrence. Jared Elledge is an honorary pallbearer. The family invites you to leave fond memories and kind words at www.noblesfuneral.com.

The family of Mrs. Glenda Diana Lawrence created this Life Tributes page to make it easy to share your memories.

Send flowers to the Lawrence family.