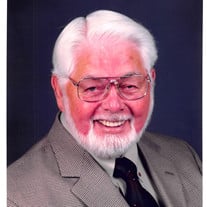 Mr. Glenn Garven Chance, 85 of Roans Prairie, Texas passed away Wednesday, June 8th at his home. A memorial service celebrating his life will be held at 10:30am, Saturday, June 18th At Bays Chapel Methodist Church in Richards, Texas. Rev. Eric Dehmer will officiate. Arrangements are under the direction of Nobles Funeral Chapel. Glenn was born August 23, 1930 in Jenks, Oklahoma to Grover and Josephine (Eddings) Chance. He graduated from Daniel Webster High School in 1950 and married his high school sweetheart, Donna, in 1951. They were happily married for over 64 years. Together they raised a son and a daughter. He began his career with Lee C. Moore in Tulsa, Oklahoma where he helped set up rigs. He then moved on to start his own business, Chance Sales and Service in Shreveport, Louisiana. Drilco admired his hard work ethic and persuaded him to work for them. Within Drilco, he advanced to the position of Executive Vice President. One of his many accomplishments was the co-invention of HEVI-WATE Drill Pipe with engineer, Sam T. Crews. In 1977, Glenn organized Chance Collar Company. By then, spiral drill collars had become a standard in directional drilling, so Glenn incorporated the spiral concept in his HEVI-WATE product. This revolutionary design enabled world-wide development of offshore drilling, and to this day is still the industry standard. Sales grew to some 3,500 units per month with a total value of a billion dollars annually. In 1979, Chance Collar Company was purchased by W. R. Grace. Shortly thereafter, Glenn formed Brangus Supply, with his son and daughter, Rick and Cathy. Donna and Glenn searched passionately for the perfect place to retire. They found that place in Roans Prairie, which became the family retreat known as Chance Ranch. They had many interests at the ranch; including horses, carriages, parades, antique autos and tractors. These were enjoyed by their family and friends alike. The family enjoyed the ranch atmosphere and all that it entailed. Glenn was a 50 year member of Shreveport Lodge #010, as well as a York Rite Mason and El Karubah Shriner. Mr. Chance is survived by his loving wife Donna; his daughter Cathy Chance McCleskey; son Rick Douglas Chance and his wife Cathy; sisters Cynthia Bachtenkircher and Shirley Reaka; grandchildren Carrie McCleskey Turner and husband Mason, Robyn Kelli Chance, Adam Christopher Chance, Hailey McCleskey Sorrell and husband Jordan; great-grandchildren Ryan Chance Curtis, Reagan Michelle Wise, Rebecca Jo Wise, Ashton Turner, Kiely Turner, Wyatt Hunter Sorrell and Levi Chance Sorrell. He was preceded in death by his parents; brother Harold Chance and sisters Mildred Leikam and Polly Davis. In lieu of flowers, memorial contributions may be directed to Bays Chapel United Methodist Church in Glenn’s memory at P. O. Box 391, Richards, Texas 77873. You are invited to leave kind words and fond memories at www.noblesfuneral.com.

The family of Mr. Glenn Garven Chance created this Life Tributes page to make it easy to share your memories.

Send flowers to the Chance family.