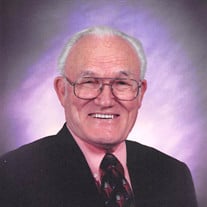 In the measureless realm of time, when conceived, God gave life to Glenn O. Rowe given to Clarence O. and Mary Blanche McCaslin Rowe. Glenn began his earthly journey on January 15, 1927, and on April 21, 2018 went to be with the Lord. Visitation with family and friends will be held from 5:00 – 7:00 pm, Thursday, April 26th at Nobles Funeral Chapel. A celebration of his life will be at 2:00 pm., Saturday, April 28th at First Baptist Church of Navasota with Rev. Clyde Larrabee officiating. At his request he will be buried in the Houston National Cemetery on Tuesday, May 1st at 11:15am. Arrangements are under the direction of Nobles Funeral Chapel. Glenn is rejoicing with his Lord, mother, father, brother Wayne Rowe, sister Clara Mae Rowe Smith and her husband Lee, father-in-law William Elmer Milholen, mother-in-law Nancy Olive Norman Milholen, two brothers-in-law Russell Milholen, his wife Della and Tony Burl Milholen, and a host of other relatives and friends. He leaves to cherish his memory, wife of over seventy one years Bennie Sue Milholen Rowe, children and their spouses Glenda Rowe Klemm and Bill, Gary Rowe and wife Lana, Gina Rowe Battles, sister Marquette Puckeutt sister-in-law Teen Rowe, grandchildren and their spouses Connie Edwards, Shelley Rowe Poer and Evan, Shawna Rowe Lyles and Sean, Travis McAnally and Kathy, Melissa Noland, and Gary Rowe, Jr. Thirteen Great-grandchildren and two great, great-grandchildren. Four step great, great-grandchildren and one great, great step grandchild. His sisters-in-law and their spouses Betty Milholen Crowder and Charles, Wilma Milholen Mize and Dale, brother-in-law Hearl Milholen and Betty. He served our country as seaman first class in the Navy. He was a member of First Baptist Church Navasota, served as a Deacon and on many committees and worshipped the Lord every day. He was a 50+ member of the Masonic Order. Served as Master of S. P. Waltrip #1328 and a Life Member, A Past Master of Navasota Lodge #299, served as a District Deputy Grand Master, District 29B., Chapter #3 and Council #7, The American Legion, McClusky Post 640. Waller Chapter #1047 Order of the Eastern Star, (endowed member) was a Past Patron many times and loved every minute. Served Grand Chapter of Texas on many committees, one was Grand Representative of Minnesota in Texas, his counterpoint was Dale Smith of Minnesota and Glenn and he loved each other when they met, as well as his wife Iretta and so many of the others in their Grand Chapter, Glenn was a member of the White Shrine of Jerusalem, Cross of Texas Shrine #1 served as WOS several times. He worked as a Food Broker for Imperial Sugar forty years. Served as President of HGMRA, Texas Spurs, Retail Grocers Association. A member of Play, Praise and Travel Club, sponsored by First Baptist Church Navasota, a 42 Club, and Social Security Social Club. He loved to go deer, duck hunting, fishing, watching football and baseball, western movies, reading western books but most of all having his children, grandchildren, great-grandchildren and great, great-grandchildren visit. Pallbearers will be Travis McAnally, Gary Rowe, Jr., Sean Lyles, Evan Poer, Steven and Jeffery Mize and Larry Rowe. Honorary Pallbearers will be Deacons of First Baptist Church. In Glenn’s memory, memorials may be made to First Baptist Church Navasota. The family would like to thank Dr. C. H. Prihoda and all the staff at Grimes St. Joseph for the excellent care provided Glenn. You are invited to leave kind words and fond memories at www.noblesfuneral.com.

In the measureless realm of time, when conceived, God gave life to Glenn O. Rowe given to Clarence O. and Mary Blanche McCaslin Rowe. Glenn began his earthly journey on January 15, 1927, and on April 21, 2018 went to be with the Lord. Visitation... View Obituary & Service Information

The family of Mr. Glenn O. Rowe created this Life Tributes page to make it easy to share your memories.

In the measureless realm of time, when conceived, God gave life...

Send flowers to the Rowe family.