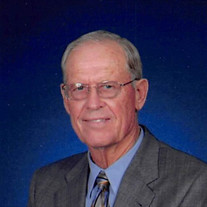 Gus Oris Boehm, 83, of Navasota passed away peacefully surrounded by family on August 19, 2017 at The Seasons on Water Street Assisted Living in Navasota. Visitation with family and friends will be Monday, August 21, from 5:00-7:00pm at Nobles Funeral Chapel. A prayer service will follow at 7:00pm. Funeral services to celebrate his life will be held at 10:00am Tuesday, August 22, at Trinity Lutheran Church with interment to follow in Oakland Cemetery. Rev. Matthias Dinger will officiate. Arrangements are under the care of Nobles Funeral Chapel. He was born September 15, 1933 as the 9th of 11 children to Gus and Sophie Boehm. He graduated from Anderson High School in 1953, and married Pauline Noski on July 15, 1959. Oris or “Bubba” as he was known to his family and close friends, worked for Mid-South Synergy Electric Company for 45 years. He made many life-long friends through his work. Oris was a true outdoorsman that enjoyed God’s creation. He especially enjoyed gardening and always had more fresh vegetables than his family could eat. He was always willing to share the extra with others from the church. He had a small herd of cattle that he worked on his family’s farm in Anderson which brought him great joy. He was baptized, confirmed, married and served as an Elder at Trinity Lutheran Church of Navasota. His faith was his biggest priority, and he instilled that in his family. He led by example to be generous to those less fortunate and help whenever possible. He was a friendly, good ole boy that enjoyed the simple pleasures of life. He was a faithful, loyal and tenderhearted servant of Jesus Christ. Oris is survived by his devoted wife of nearly 60 years, Pauline Boehm; daughters and sons-in-law Brenda and Russell Bond and Amy and Fred Heer; brother and sister-in-law Bill and Gloria Boehm; sister and brother-in-law Ruth and Fred Homeyer and grandchildren Christian, Brittany, and Allie Bond and Alexander and Sophia Heer. Serving as pallbearers are Rodney McLaurin, Russell Bond, Christian Bond, Kevin Homeyer, Clell Goodson and Gary Jaetzold. Honorary pallbearers are Fred and Alexander Heer. Mr. Boehm was preceded in death by his parents and siblings Esther Shaeffer, Lucille Schaeffer, Gertruede Hilley, Emmett Boehm, Eddie Boehm, Maeloa Roese, Leonard Boehm and Erna Hemann. You are invited to leave kind words and fond memories at www.noblesfuneral.com.

Gus Oris Boehm, 83, of Navasota passed away peacefully surrounded by family on August 19, 2017 at The Seasons on Water Street Assisted Living in Navasota. Visitation with family and friends will be Monday, August 21, from 5:00-7:00pm at Nobles... View Obituary & Service Information

The family of Mr. Gus Oris Boehm created this Life Tributes page to make it easy to share your memories.

Send flowers to the Boehm family.