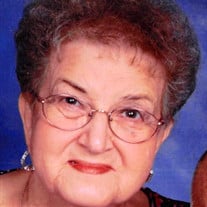 Gwen Sanders, 79 of Navasota, the wife of Roy Dell, the sweet mother of Karen, Melissa, Theresa and Carol Denise, went to be with her Heavenly Father on May 5, 2018. Meme will be greatly missed by her 9 grandchildren and 19 great-grandchildren. Visitation will be on Tuesday, May 8th at Nobles Funeral Chapel from 6-8 pm. Funeral services will be held on Wednesday, May 9th at 10 am at Trinity Lutheran Church of Navasota with the Rev. Matthias Dinger officiating. Interment will follow in Oakland Cemetery in Navasota. Gwen was born on November 22, 1938, in Mart, Texas. She is the daughter of Edwin and Lydia Lehrmann Krumnow. She was baptized on January 1, 1939, by Pastor J.L. Herzog at Grace Lutheran Church in Marlin, Texas. She was confirmed on April 6, 1952, at the same church by Pastor J.L. Werner. On a blind date in 1954, Gwen met the love of her life, Roy Dell Sanders, and the two of them were married on July 7, 1956, at Grace Lutheran Church of Marlin. Her life was filled with many wonderful blessings. For her daughters, she was a Bluebird/Campfire leader, she enjoyed teaching Sunday School, being a secretary for the church council, a member of the L.W.M.L. and involved in PTA. She is preceded in death by her parents; brothers and sister-in-law, Eugene and Willie Mae Krumnow and Clifford Krumnow; sisters and brothers-in-law, Ruby and Bob Schmidt and Gloria and Howard Harrison; and father-in-law and mother-in-law Cecil and Carrie Sanders. She leaves behind her husband Roy Dell Sanders, who the Lord blessed with 61 years of marriage; her daughters and their spouses, Karen Reynolds and John Guinn of Copperas Cove, Melissa and Cecil Meekins of Brenham, Theresa and Douglas Kettler of Brenham and Carol Denise and Joe Kmiec of Chappell Hill. Her grandchildren and spouses, Jennifer and David Gilliam, Lydia and Corey Nix, Bradley and Alyssa Meekins, Jason and Natalie Meekins, Melanie and Darren Holmes, Matthew and Ashley Kettler, Heidi and Dustin Nowicki, Jarrett Kmiec and Janni Puente, and Carrie Kmiec and Erik Marmol. Her 19 great-grandchildren, Matt and Makayla Gilliam, Ali, Hunter and Colton Nix, Brantly and Cambrie Meekins, Makylin, Khloe and Sadie Holmes, Grady Meekins, Caleb, Lyla, Rosie, Eli and Lily Kettler and Hannah, Taylor and Dillon Nowicki; sisters-in-law Nellie Krumnow and Evelyn Phillips; and brother-in-law and sister-in-law Melvin and Nelda Williams and numerous nieces and nephews. Pallbearers are her grandsons, Bradley Meekins, Jason Meekins, Matthew Kettler, Jarrett Kmiec, David Gilliam, Corey Nix, Darren Holmes, Dustin Nowicki and Erik Marmol. Angels sent the family a special person to take care of Mom, Beverly Cotton, whom Mom called Buela just because. Special thank-you to Encompass Home Health and Hospice employees, Tanya Scott, Susie and Fran.

Gwen Sanders, 79 of Navasota, the wife of Roy Dell, the sweet mother of Karen, Melissa, Theresa and Carol Denise, went to be with her Heavenly Father on May 5, 2018. Meme will be greatly missed by her 9 grandchildren and 19 great-grandchildren.... View Obituary & Service Information

The family of Mrs. Gwen Sanders created this Life Tributes page to make it easy to share your memories.

Gwen Sanders, 79 of Navasota, the wife of Roy Dell, the sweet...

Send flowers to the Sanders family.