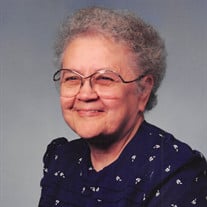 Mrs. Helen Ruth (Lyon) Guinn, 95 of Navasota passed from this life into the presence of her Lord, Friday, October 5th surrounded by her family. Viewing and vistation will be held from 6:00 – 8:00pm Thursday, October 11th at Nobles Funeral Chapel. A celebration of her life will be held at 2:00pm Friday, October 12th at Faith Outreach Christian Center, followed by interment in Oakland Cemetery. Pastor Henry A. Sanders will officiate. Arrangements are under the direction of Nobles Funeral Chapel. Helen was born on July 21, 1923 in Emmett, Idaho into a pioneer family whose last name was Shoemaker. Her mother’s name was Ruth Alice Shoemaker Burns. She grew up most of her youthful life in Anacortes, Washington, then moved to Arvin, California. In 1942, she worked the assembly lines for Lockheed, making radio parts for airplanes. In 1943, at 20 years of age, she married the love of her life, James Adolphus Guinn. In 1944, while still in Arvin, she worked the potato sheds, grading potatoes. The next 20 years she spent raising her three children as a stay at home mom. Her oldest son, James Daniel (J.D.) Guinn; second son David Paul Guinn, and her only daughter, Naomi Ruth Guinn (Sanders). In 1954 the family moved to Concord, California. James, her husband, worked as a truck driver and she busied herself with the children and their church, Full Gospel Church. In the 60’s, she became the church librarian and built their library to over 5,000 books. In September, 1971, she lost her precious husband of 28 years and a few years later she moved to Redding, California where she spent the next ten years working for the Salvation Army before retiring in 1990. After retiring, Helen, her mother and her adopted sister, Michelle Mary Burns moved from California to Navasota to be near her daughter and son-in-law, Pastors Henry and Naomi Sanders. Shortly after moving to Navasota, she became involved with volunteering her gifts to the community. In 2002, while volunteering at the Christian Community Services, she was awarded the Governor’s Volunteer Award for her faithful community service. Her home in Navasota also housed her personal library of over 5,000 books. Between 1964 and 2007, Helen had read through 26 versions of the Bible and over 2000 books. In 2006, she began to lose her eyesight and at her passing, she had lost all of her eyesight and most of her hearing. It was her dream to travel around the world, and she made it halfway! She had travelled to Israel, Jordan, Syria, Egypt, Germany, Canada, Mexico, Hawaii and most of the states in the USA. The rest of the world she visited through the many books she read. Helen was a longtime member of Faith Outreach Christian Center, but she loved to visit many other churches in the community, she truly loved the Body of Christ! She had a passion to help hurting people. She shared her loved around the world through missions by sending clothes, food, finances, Bibles and books. She continued her ministry of giving up until her passing by purchasing, providing and sending Bibles locally and internationally to such places as the Philippines, India, Cambodea, Hawaii, Pakistan, Africa and Mexico. Helen was preceded in death by her loving husband of 28 years, James Adolphus Guinn, her mother Ruth Alice Burns and a granddaughter, Alesa Lea Kashwer. She is survived by sons and daughters-in-law, J.D. and Sharon Guinn of Kauai, Hawaii, David and Nellie Guinn of Van Buren, Arkansas; her daughter and son-in-law Naomi and Henry Sanders of Navasota; ten grandchildren, 28 great-grandchildren and 20 great, great-grandchildren; numerous nieces and nephews; her dear sister in the Lord, Ruth Mullins and a great host of friends. In lieu of flowers, Mom Guinn asked that memorial contributions be made in her memory to Faith Outreach Christian Center, Attn: Bibles for the World, so that the program that was so very close to her heart can continue to touch others. You are invited to leave kind words and fond memories at www.noblesfuneral.com.

Mrs. Helen Ruth (Lyon) Guinn, 95 of Navasota passed from this life into the presence of her Lord, Friday, October 5th surrounded by her family. Viewing and vistation will be held from 6:00 &#8211; 8:00pm Thursday, October 11th at Nobles Funeral... View Obituary & Service Information

The family of Mrs. Helen Ruth Guinn created this Life Tributes page to make it easy to share your memories.

Mrs. Helen Ruth (Lyon) Guinn, 95 of Navasota passed from this...

Send flowers to the Guinn family.