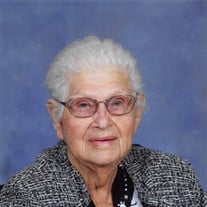 Mrs. Helen Jean Kimich, 89, of Anderson, passed away Friday, October 26th at home surrounded by her loving family. Visitation will be held Monday, October 29th from 5:00-7:00pm at St. Stanislaus Catholic Church in Anderson with a Parish Rosary following at 7:00pm. A Funeral Mass will be celebrated Tuesday, October 30th at 10:00am at the church with Rev. Eli Lopez and Monsignor Adam McClosky officiating. Rite of committal will follow in the church cemetery. Arrangements are under the direction of Nobles Funeral Chapel. Helen was born March 20, 1929, to Tony and Bessie Cone in Dayton, TX. The family moved to Anderson and then Pasadena. She married Albert Kimich on June 24, 1950, and then returned to Anderson to farm. In addition to farming, she spent years raising her family, working in a furniture factory, and finally working in the school cafeteria where she was famous for her homemade rolls. After retiring she spent her life with her children, grandchildren, and husband until he passed away. Helen, or Grandma Helen as she was affectionately known, spent her whole life taking care of others. As a child she took care of cousins and siblings. Later in life she took care of her mother and mother-in-law. She spent many hours taking care of the elderly in the neighborhood. She loved to cook, and, before catering was common, she and her daughter Maxine would cook large meals for weddings in addition to the weekly family Sunday dinners. She raised a garden for many years canning vegetables for friends and family. She loved to go out to eat as well, especially to her favorite restaurant, 7 Leguas in Montgomery, where all the staff knew her as Mama. Mrs. Kimich was preceded in death by her parents; husband Albert Kimich; daughter Maxine Lee; 3 sisters and 2 brothers. She is survived by daughters and sons-in-law, Jeanette & Tom Upton, Mary Jane Langdon, Patricia & Sam Broadway, Linda & Sewell Stewart, Joyce & Tim Horton, Pauline & Wayne Fread, and Ernest Lee; sons and daughter-in-law, Leon & Linda Kimich and George Kimich; sister, Martha McCleney; brother, Phillip Cone; 25 grandchildren; 17 great-grandchildren; and caregivers, Dianna Webb, Kathy Burzynski, and Beverly Anderson. Serving as pallbearers are Bernard Lee, John McKnight, Leon Kimich, II, Gabriel Kimich, Travis Stewart, and Michael Crouch. Honorary pallbearers are Mike Green, James McKnight, Jeffery McKnight, and Cleve Stewart. For those that desire, memorial contributions may be made to Hospice Brazos Valley or the Alzheimer’s Association.

The family of Mrs. Helen Jean Kimich created this Life Tributes page to make it easy to share your memories.

Send flowers to the Kimich family.