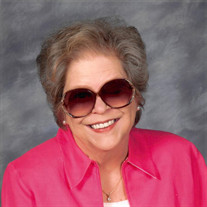 Inez Fuqua, 71 of Navasota, passed away Friday, June 12th at CHI St. Joseph Healthcare in Bryan. Visitation with friends and family will be held from 5:00 pm - 7:00 pm, Monday, June 15th at Nobles Funeral Chapel. A celebration of her life will be held at 10:00 am, Tuesday, June 16th at Friedens Church of Washington with Rev. Glen Schoeneberg presiding. Interment will follow in the church cemetery. Arrangements are under the direction of Nobles Funeral Chapel. Inez was born in Navasota, Texas on May 20, 1949 to Ruth and Gilbert Lauter. She was baptized and confirmed at Friedens Church of Washington, graduated from Navasota High School in 1967 and Sam Houston State University in 1971 and married Glenn Davis Fuqua in January, 1971. Inez began her teaching career as a 6th grade English teacher and high school Co-Ed and Home Economics instructor. She was one of the founders and sponsors of the Navasota High School Diamonettes and Class Sponsor for numerous graduating classes. After retirement, she enjoyed some time in the retail and antique business and was a partner of "A Catered Affair" for many years. She loved to travel with family and friends and had checked England, France, Austria, Switzerland, Germany, Italy, Holland, Hawaii, Boston, Washington D. C., Maine and California off of her bucket list. The beach and her farmhouse were her much cherished times, as were quarter horse racing and casinos. She loved entertaining family and friends and decorating for each holiday. The most special times were spent as "Mama Nez" to Wade and his friends and later as "Nana Nez" to Waylenn and his friends. She felt she shared and learned so much from her late friends Johanna, Dell, Gay and Barbara. With her deep strong spirit, she was a life long member of Friedens of Washington. Inez was preceded in death by her parents Ruth and Gilbert Lauter and in-laws Wilma and Buckshot Fuqua. She is survived by her husband, Glenn Fuqua; son Wade Fuqua and daughter-in-law, Tonya; grandson Waylenn Davis Fuqua; sisters and brothers-in-law Judy and Gary Bogan and Jean and Jess Mitchell; sister-in-law Becky Towns and husband David; nieces and nephews Brian and Erica, Brad and Sherri, Lauren and David, Kasha and Dustin, and Christine and Eric and numerous great nieces and nephews. You are invited to leave kinds words and fond memories at www.noblesfuneral.com.

Inez Fuqua, 71 of Navasota, passed away Friday, June 12th at CHI St. Joseph Healthcare in Bryan. Visitation with friends and family will be held from 5:00 pm - 7:00 pm, Monday, June 15th at Nobles Funeral Chapel. A celebration of her life... View Obituary & Service Information

The family of Mrs. Inez Fuqua created this Life Tributes page to make it easy to share your memories.

Send flowers to the Fuqua family.