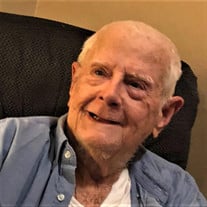 Jack Wallace Baker, 90 of Navasota, passed away Saturday, October 19th at the Waterford in College Station. Visitation with family and friends will be Friday, October 25th from 5:00-7:00 pm at Nobles Funeral Chapel. A graveside service will be held Saturday, October 26th at 2:00 pm at Oakland Cemetery in Navasota. Arrangements are under the direction of Nobles Funeral Chapel. Jack was born November 30, 1929 to Myrtle and Henry C. Baker in Navasota, Texas. Jack attended and graduated from Texas A&M University with a degree in Agricultural Engineering and upon graduation, he reported for duty in the United States Army. After a tour of duty stationed in the south of France where he was wounded by a flying champagne cork, he returned to Navasota and the insurance and real estate business with his father, Henry and brother-in-law, Elliot Goodwin. On April 10, 1954, he married Jacquelyn “Jackie” Venable and together they made a home and raised a large family in Navasota. Jack was a proud member of the Masonic lodge and enjoyed relaying that he had been a Master Mason for “more than fifty years”. He cherished his right to vote and was active in our democracy. For several years, he served as the Grimes County Democratic party chair. After selling his business with Elliot Goodwin, he went in to the banking business at the Security State Bank and then a contract landman for several different Oil and Gas companies. Jack was an avid outdoorsman and loved to hunt. For those that knew Jack you know exactly what that last sentence means. Jack and Jackie were faithful attendees of the First Presbyterian Church in Navasota. Jack’s kindness was exposed through Jackie, his beloved wife of sixty-two years. Together they were “Jack & Jackie” where you saw one, you saw the other. Jack was preceded in death by his wife and his beautiful daughter Ruth Ann. He is survived by his children, Cindy Baker of Navasota, Susan Pascoe of Austin, Dr. John H. Baker and his wife Emily of Carrollton and Rosemary Upcheshaw and her husband Gigitt of Houston. He is also survived by his ten grandchildren; Henry, James and John Pascoe, Rachel, Erin, Jesse and Evan Baker and Jessica, Zachary and Jackson Upcheshaw, along with two great-grandchildren, Miles and Eliot Schauman. Jack had a quick laugh; nobody enjoyed a joke at someone else’s expense more than he did. He loved a good practical joke. Jack Baker could be sharp; there is no way around it. However, underneath that coarseness was a kindness and concern for his community and a love for his family.

Jack Wallace Baker, 90 of Navasota, passed away Saturday, October 19th at the Waterford in College Station. Visitation with family and friends will be Friday, October 25th from 5:00-7:00 pm at Nobles Funeral Chapel. A graveside service will... View Obituary & Service Information

The family of Mr. Jack Wallace Baker created this Life Tributes page to make it easy to share your memories.

Send flowers to the Baker family.