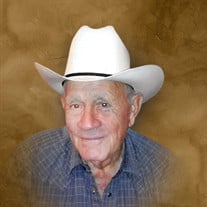 Jack Binford, 86, of Navasota, Texas, passed away peacefully on Saturday, June 29th with his loved ones by his side. Visitation with family and friends will be held Tuesday, July 2, 2019 from 5:00 - 7:00 pm at Nobles Funeral Chapel in Navasota, Texas. A celebration of his life will be at 10:00 am on Wednesday, July 3rd, also at the funeral home, with Rev. Clyde Larrabee officiating. Interment will follow in Oakland Cemetery. Arrangements are under the direction of Nobles Funeral Chapel. Jack was born December 9, 1932 in Yarbrough, Texas to George Ingram and Dora Lee (Patterson) Binford. He was raised on a farm where he learned many trades at a young age. He attended Navasota schools and was a ranch hand worker for many years. After leaving the farm, Jack went to work at his first job at a service station and he proudly served eight years in the Army National Guard. On July 1, 1960, Jack married Leona Sage and together they raised two children. Jack and Leona lived in Navasota all of their married life and were members of the First Baptist Church. He was a loving father, grandfather, husband, son, brother and friend. Jack worked for the City of Navasota in the gas department reading meters for many years. Once the City sold the gas department, he went to work for United Telephone Company. On January 1, 1994, after 25 years of employment, Jack retired from the telephone company, but his love for work did not stop there. For the next 20 years, he worked long hours on the ranch, feeding cattle, bailing hay and showing the young hands how to do it the right way! Jack was a hard-working man, honest and passionate about his family. He was never one to sit around the house. If he wasn’t working hard on the ranch, he was at Mother Goose Daycare, helping take care of all of “Papa’s babies” or out at “The World Headquarters” hanging out with friends. He raised a beautiful family, lived an amazing life and will be remembered forever. Jack is survived by his wife of 59 years, Leona Binford; daughter and son-in-law , Kay and Marc Neutzler; daughter-in-law Lisa Binford and Clay Weaks; granddaughter Kristen Pearson and husband Rodney and great-granddaughter Kamryn Pearson; granddaughter Kourtney Neutzler and Dion Curry and great grandchildren Addisyn Curry and Gracen Curry; grandsons Heston Alan Binford and Peyton Alan Binford; sisters and brothers-in-law Opal Perry, Emma Lee Smith, Joyce and Vernon Hensarling, B.J. and Johny Pitts; sister-in-Law Doris Binford; brothers and sisters-in-law Bobby Joe and Sandra Binford, Wyatt Harper (Red) and Leah Binford and brother-in-law Carroll Lee (Bubba) Sage. Serving as pallbearers are Heston Binford, Peyton Binford, Rodney Pearson, Dion Curry, Darrell Smith, Will Binford, John Pool and Roy Wisnoski Honorary Pallbearers include Ricky Binford and former co-workers of United Telephone Company. Jack was preceded in death by his parents, George and Dora Lee (Patterson) Binford; son Ronald Ben Binford; granddaughter Kallie Ann Neutzler; stepmother Jessie Perry Binford, father-in- law and mother-in-law Lee and Carrie Sage; sisters and brother-in-law Theresa Faye and Leon Hughes and Georgia Jamerson; brothers and sisters-in-law Schaefer and Sally Binford, Sam Binford, Ross and Marvis Binford, Wayne and Hattie Binford, Donald Earl and Geraldine Binford, Jack and Sammie Perry and Marie and Richard Berry. In lieu of flowers, the family suggests that memorial contributions in Jack’s name be made to First Baptist Church of Navasota, 301 Church Street, Navasota, TX 77868. You are invited to leave kind words and fond memories at www.noblesfuneral.com.

Jack Binford, 86, of Navasota, Texas, passed away peacefully on Saturday, June 29th with his loved ones by his side. Visitation with family and friends will be held Tuesday, July 2, 2019 from 5:00 - 7:00 pm at Nobles Funeral Chapel in Navasota,... View Obituary & Service Information

The family of Mr. Jack Binford created this Life Tributes page to make it easy to share your memories.

Send flowers to the Binford family.