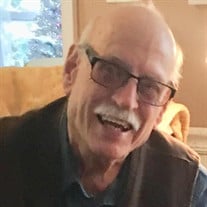 On Friday, August 6, 2021, Jack Raymond Wilder passed away at the age of 88, surrounded by his family in the comfort of his home. He was born on October 21, 1932, in Silsbee, Texas, into a large family. He had a hardscrabble early life which led him to join the Navy as a young man and he ultimately served in the Korean War. His military service provided him the opportunity to pursue and receive a degree from Stephen F. Austin State University. In 1955 Jack married Mary Jean Keith and they lived in California, as well as various towns in east Texas before ultimately settling in Henderson, Texas. The last season of his life was spent in mountains of Hendersonville, North Carolina. Jack taught high school, pastored small Baptist churches, but worked as an industrial electrician for most of his life. To know him was to know the value of hard work. At 86 years old he still worked part-time at local grocery store where he enjoyed interacting with the customers and keeping his fellow employees smiling with gifts of chocolate candy. His passion for life revealed itself through his love of creating. He thoroughly enjoyed painting, primarily watercolors, constructing (lumber, saws and paint were his constant companions), writing and illustrating children’s short stories. He was a voracious reader throughout his life, always trying to satisfy his curious mind along with pursuing his special interest in Christian denominations. Jack, Dad, Pawpaw will be deeply missed by his family. He is survived by his wife, Mary; daughters Pam Wilder Joslin (Michael) of Buladean, NC and Patti Wilder Royce of Bristol, TN; grandchildren Pamela Caviness of Longview, TX, Nathaniel Wilder and Josiah Keith Royce of Bristol, TN; twin brother Jim Wilder (Marilyn) of Conroe, TX.; and several great grandchildren, nieces and nephews. Barry Murchison will conduct a private graveside service on August 16, 2021, at Martins Prairie Cemetery in Keith, Texas. If desired, memorial donations may be made to Four Seasons Hospice 571 S. Allen Road, Flat Rock, NC 28731. You are invited to leave kind words and fond memories at www.noblesfuneral.com.

On Friday, August 6, 2021, Jack Raymond Wilder passed away at the age of 88, surrounded by his family in the comfort of his home. He was born on October 21, 1932, in Silsbee, Texas, into a large family. He had a hardscrabble early life which... View Obituary & Service Information

The family of Mr. Jack Raymond Wilder created this Life Tributes page to make it easy to share your memories.

Send flowers to the Wilder family.