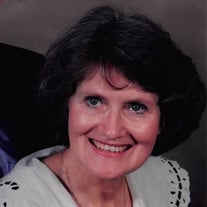 Jacquelyn “Jackie” Estelle Venable Baker of Navasota passed away June 18th, 2016 at the Waterford in College Station. Visitation with family and friends will be Friday, June 24th from 5:00-8:00 pm at Nobles Funeral Chapel. A graveside service will be held Saturday, June 25th at 10:00 am at Oakland Cemetery in Navasota. Rev. Fred Seay will officiate. Arrangements are under the direction of Nobles Funeral Chapel. Jackie was born January 15, 1931 to Inez Wickliffe and Howard Venable in Wills Point, Texas. Later the family moved to Levelland, Texas to farm cotton. Jackie attended and graduated from Texas Tech University with a degree in Home Economics and landed a job as a Home Service Advisor with the Gulf States Utility Company in Navasota. On April 10, 1954 she married Jack W. Baker of Navasota and together they made a home and raised a large family in Navasota. Jackie received a Master’s degree in Early Childhood Development from Texas A&M University and served as an educator for the Navasota Independent School District for many years. The majority of her career was focused on education and development for children with special needs. She was active in the summer swimming program at the community pool working as a certified swimming and lifeguard instructor for the American Red Cross. She and Jack were faithful attendees of the First Presbyterian Church in Navasota where Jackie did everything she could and more than most people can imagine serving in many different capacities. She was always involved with Vacation Bible School, she taught Sunday school for pre-school children and was involved with the Presbyterian Women’s Group. Jack often said that if the doors were open, she was there. Jackie was preceded in death by her father, Howard and mother, Inez; her sister Ripple Scott and by her beautiful daughter Ruth Ann Baker. She is survived by her husband of sixty-two years Jack, and children, Cindy Baker of Navasota, Susan Pascoe of Austin, Dr. John H. Baker and his wife Emily of Carrollton and Rosemary Upcheshaw and her husband Gigitt of Cypress. She is also survived by her joy in the form of ten grandchildren Henry, James and John Pascoe; Rachel, Erin, Jesse and Evan Baker; and Jessica, Zachary and Jackson Upcheshaw. Jackie Baker touched so many lives, so many. We celebrate in the knowledge of her faith that Jackie is now healthy and she is whole. But, we also celebrate a life lived in service of her community and her family. A life lived in kindness and generosity with compassion for the weakest among us. A life dedicated to the idea of making the world a better place through selflessness. She loved her family, she adored her grandchildren, she cared about her community deeply and everyone in it. In lieu of flowers, the family asks that you consider a memorial contribution to First Presbyterian Church of Navasota, 302 Nolan Street, Navasota, TX 77868. You are invited to leave kind words and fond memories at www.noblesfuneral.com.

Jacquelyn &#8220;Jackie&#8221; Estelle Venable Baker of Navasota passed away June 18th, 2016 at the Waterford in College Station. Visitation with family and friends will be Friday, June 24th from 5:00-8:00 pm at Nobles Funeral Chapel. A graveside... View Obituary & Service Information

The family of Mrs. Jackie V. Baker created this Life Tributes page to make it easy to share your memories.

Send flowers to the Baker family.