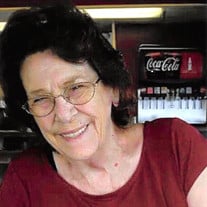 Mrs. Jackie Lee (Stow) Grubbs, 73, of Cleveland, passed away Monday, January 16 at Conroe Regional Hospital. Funeral services are scheduled for Friday, January 20, at 2:00pm at Nobles Funeral Chapel. Interment will follow in Oakland Cemetery. Arrangements are under the direction of Nobles Funeral Chapel. Jackie was born March 14, 1943 in Battle Creek, Michigan to Wilford Stow and Helen Lambert Stow. She married David Grubbs, Sr. and together they had five children. They were married for 60 years until his death in March of 2015. Jackie wore many hats in her life, but it was the ones of wife, mother, mama-in-law, grandma, mawmaw, and sister and that she treasured most. She was quirky, sassy (so much so that it became her nickname), outgoing and funny. Her laughter was contagious and her love knew no bounds. She loved people and never met a stranger she didn’t love. She also loved animals, particularly her three dogs, Henry, Charlie and Little Girl. Her children, grandchildren and great-grandchildren were loved by her unconditionally and without judgment. Her arms were always open for not only family but friends as well. She is survived by daughter and son-in-law Jacqueline (Mandie) and Marty Gottselig of Cleveland, Texas; sons and daughter-in-law David Lee Grubbs, Jr., of Dallas, Chris and Donna Grubbs of Tomball, and Buddy Grubbs of Cleveland; and brother, Rex Stow, Sr., of Anderson. Serving as pallbearers are Rex Stow, Jr., of Anderson, Shawn Stow of Jewett, James Grubbs of Deanville, Dennis Grubbs of Cypress, Alvin White, Jr., of The Woodlands and Calvin White of Richmond. She was preceded in death by her parents, son James (Bubba) Grubbs and Grandson Blaine Grubbs. You are invited to leave kind words and fond memories at www.noblesfuneral.com.

The family of Mrs. Jackie Lee Stow Grubbs created this Life Tributes page to make it easy to share your memories.

Send flowers to the Grubbs family.