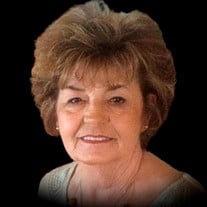 Jackie E. Phillips, 70, of Richards, was called into the loving arms of the Lord on Friday, July 23, 2021. Visitation with family and friends will be held Tuesday, July 27th from 5:00 – 7:00 pm at Nobles Funeral Chapel. Graveside services and Rite of Committal will be held at 10:30am, Wednesday, July 28th in St. Joseph Catholic Cemetery in Stoneham with Monsignor Adam McCloskey will officiate. Arrangements are under the direction of Nobles Funeral Chapel. Jackie was born in Navasota, Texas on July 15, 1951, to Howard Ferguson and Lydia Fuqua. She married Patrick S. Phillips, known as Pat to many, on August 30th, 1969. Together, they enjoyed 50 years of marriage and raised two children together. Jackie worked in the oil and gas industry in Houston where she grew her beloved family. At the same time, she and Pat labored weekends building their ranch in Richards where the two retired in 2013. Jackie enjoyed gardening and cooking for her family. Anyone given her renowned salsa, pickles, or plum jelly was cherished. She had a no non-sense personality and was often the voice of reason for so very many. Jackie loved her husband, children, and grandchildren above all, and sacrificed willingly for their benefit. She thoroughly enjoyed traveling and often planned routes that would happen by a casino. Anyone Jackie considered a friend knew they had a person in their life they could confide in and depend upon. Jackie was a member of St. Joseph Catholic Church in Stoneham, as well as St. Stanislaus in Anderson. She is survived by her son Patrick Gerard Phillips and wife Jennifer of Houston, daughter Kelly Phillips and fiancé Shaun Martinez of Corpus Christi; sister Linda Fay Hinze and husband Allan of Brenham; brothers-in-law Malcome Phillips and wife Denise, Theodore Phillips and wife Sandra, and Walter Phillips and wife Lea Ann; sister-in-law Pauline Michno; grandchildren Caitlin Mitchell and husband Eric, Brandon Phillips, and Faith Fletcher; great grandchild Layne Leeann Mitchell, and numerous nieces and nephews. Jackie is preceded in death by her husband Patrick S. Phillips, parents Howard Ferguson and Lydia Fuqua, daughter Monica M. Phillips, sisters Patsy Ann Lewis and Darlene Vogler, brothers-in-law Tomas C. Phillips and wife Nancy, Christopher M. Phillips, and sister-in-law Teresa M. Phillips. Serving as pallbearers are William Kowis, Allan Hinze, Brad Hinze, Frank Nowak, Brandon Phillips, and Eric Mitchell. The family invites you to leave fond memories and kind words at www.noblesfuneral.com.

Jackie E. Phillips, 70, of Richards, was called into the loving arms of the Lord on Friday, July 23, 2021. Visitation with family and friends will be held Tuesday, July 27th from 5:00 &#8211; 7:00 pm at Nobles Funeral Chapel. Graveside services... View Obituary & Service Information

The family of Mrs. Jackie E. Phillips created this Life Tributes page to make it easy to share your memories.

Jackie E. Phillips, 70, of Richards, was called into the loving...

Send flowers to the Phillips family.