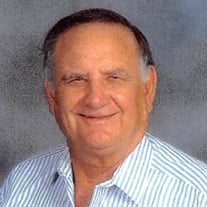 James W. Chenault, 83 of Burnet, Texas passed away Monday, December 10th. A celebration of his life will be held at 1:00pm, Friday, December 14th at Nobles Funeral Chapel in Navasota, Texas with interment following in Wheat Cemetery in Millican. Rev. Mickey Waggoner will officiate. Arrangements are under the direction of Nobles Funeral Chapel. James was born June 9, 1935 in Wellborn, Texas to John Alvin and Christine (Konecny) Chenault. He attended and graduated high school in Hempstead and married Lois Pauline Fitzgerald on September 20, 1957 in Nacogdoches, Texas where he was attending business college. James proudly served the country he loved in the U. S. Army until his honorable discharge in 1957. He also attended Blinn College. James entered the field of law enforcement and became a Texas State Trooper for the Department of Public Safety, a career that he would excel at and that would span many, many years. He was the recipient of an award for outstanding service by the Capital Area Police Union and recognized for his outstanding service to the Community by the Hundred Club of Austin. He was a member of the DPS Officers Association, Texas State Troopers Association, Sheriff’s Association of Texas, and the American Legion, Post 285 in Mason, Texas. Inasmuch as he proudly served throughout his life, he was most proud of his family. He also enjoyed fishing, hunting and sight-seeing. Left to cherish his memory are his wife of 61 years, Lois Chenault; son Duke D. Chenault of Hackberry, LA; brothers and sisters-in-law Douglas and Beth Chenault, and Charlie and Betty Chenault; sister Barbara Wilkes; and grandchildren Christy and Robert Scifres, Brandi and Chris Masopust, Dustin Chenault, Robert Wesley Chenault and Amanda Chenault, Clifton Sanderson and Tacora, Kathleen and Tony Trollinger and Ricky Sanderson. Serving as pallbearers are Robert Scifres, Jake Scifres, Chris Masopust, Robert Chenault, Austin Prince, Tyler Prince and Clifton Sanderson. Honorary pallbearers are Dustin Chenault and Ricky Sanderson. Mr. Chenault was preceded in death by his parents; son Wesley Chenault, and brother John A. Chenault. In lieu of flowers, the family suggests that a memorial donation be made in his name to a favorite charity. Friends and family are invited to leave kind words and fond memories at www.noblesfuneral.com.

James W. Chenault, 83 of Burnet, Texas passed away Monday, December 10th. A celebration of his life will be held at 1:00pm, Friday, December 14th at Nobles Funeral Chapel in Navasota, Texas with interment following in Wheat Cemetery in Millican.... View Obituary & Service Information

The family of Mr. James W. Chenault created this Life Tributes page to make it easy to share your memories.

Send flowers to the Chenault family.