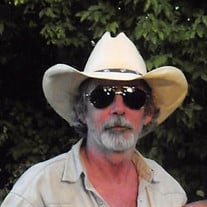 James Andrew (Andy) McGinty, 62 died Sunday, July 3rd at home surrounded by his loving family. A gathering of family and friends will celebrate his life at 1:00pm on Friday, July 8th at Nobles Funeral Chapel. Andy was born May 30, 1954 in Houston, Texas. His family moved to Old Washington when he was a young boy, and he attended both junior high and high school in Navasota but graduated from Brenham High School. After graduation, he worked at various odd jobs and set out on a quest for finding his "niche" in life. An opportunity arose and Andy and his father decided to buy a bar, and thus "Papa John's" out in Old Washington was born! Andy and his great friend, James Lawrence, ran and managed it for years. During this time he met Kathy Craddock and several years later they married and had a son. Andy then went to work at Interstate SW Forge in Navasota and worked there for quite some time. As time went on, Andy and Kathy divorced yet remained good friends because of their son, Drew. Andy became "an original renaissance man" and decided to travel around driving trucks, being a carpenter, building hotels and taking opportunities to go out of state wherever the jobs would lead. He wanted to live life his way and he did. He then bought a Harley Davidson and lived life to the fullest! Andy loved making people laugh and had a great sense of humor! He lit up a room like no one else and was very much the "Life of the Party" with a heart of gold. He enjoyed dancing and was great at it; but most of all, he loved fishing, friends and family. His most prized possessions were his son Drew and his two grandkids, Summer and Jake Pearce. He loved them dearly! When his son Drew died Andy was devastated. In his later years, he worked in a pecan orchard and then helped with his parents as their caretaker. He is preceded in death by his parents, Papa John and Kathryn and his son, Drew McGinty. Survivors include his sisters, Jan Roliard and Orlando Lerma; Bev and Paul Failla; grandchildren, Summer and Jake Pearce; nieces Shannon and Juan Castillo, Jessie and Brannon Court, nephew Clay Failla and Heather Sauve; great nieces Ashlyee Castillo, Kenzie Macy, Marina Castillo, Ruby and Collins Court; great nephews Kolby Roliard, Juan Castillo and Rocco and Walker Court; great, great nieces Reese and Harper as well as many lifelong friends. He will always be loved and missed so much but never forgotten. He lived life just as he wanted and he did it his way until the very end.

James Andrew (Andy) McGinty, 62 died Sunday, July 3rd at home surrounded by his loving family. A gathering of family and friends will celebrate his life at 1:00pm on Friday, July 8th at Nobles Funeral Chapel. Andy was born May 30, 1954 in... View Obituary & Service Information

The family of Mr. James Andrew "Andy" McGinty created this Life Tributes page to make it easy to share your memories.

Send flowers to the McGinty family.