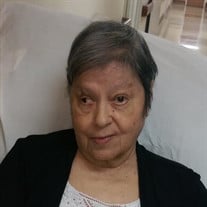 Mrs. Janie Abbott, 83, of Shiro passed away Wednesday, December 21st at Lampstand Rehab and Nursing Home in Bryan, Texas. Visitation with family and friends will be from 5:00 – 7:00pm, Tuesday, December 27th at Nobles Funeral Chapel with a rosary led by the Legion of Mary following at 7:00pm. A celebration of her life will take place at a funeral Mass at 10:00am, Wednesday, December 28th at St. Stanislaus Catholic Church in Anderson. Rev. Rodolfo “JoJo” Cal-Ortiz will be the celebrant. Interment will follow in the Shiro Cemetery. Arrangements are under the direction of Nobles Funeral Chapel. .Janie was born on March 8, 1933 in Shiro, Texas to Antonio and Guadalupe (Hernandez) Ortega. She married Nickles C. Abbot, Sr., on April 4, 1954 in Shiro and together they raised four children. Janie had a wonderful sense of humor and never met a stranger. She enjoyed having her family gathered around her and spending time with her grandchildren. One of her favorite things to do was fishing. She was an auxiliary member of Mary the First Disciple of the Legion of Mary. She is survived by her daughter and son-in-law, Linda and Donald LaSalle, Sr. of Bedias; sons Henry Abbott and girlfriend Mary Kay Preston of Shiro and Dody Abbott of Shiro; sisters and brother-in-law Claudia Gurrola of Shiro, Balerina Klawinsky of Richards and Sidonia and Gary “Bo” smith of Shiro; brothers and sisters-in-law Sam and JoAnn Fernandez of Magnolia, George and Louise Fernandez of Shiro and Anson Fernandez of Dallas; eight grandchildren and 14 great-grandchildren. Serving as pallbearers are John Gregorcyck, Donald LaSalle, II., Stephen Pottinger, D. J. Abbott, William H. Abbott and Deodoro Abbott. Honorary pallbearers are Donald LaSalle, Sr., Bo Smith, Sam Fernandez, George Fernandez and Anson Fernandez. Preceding her in death were her parents, husband Nickles C. Abbott, Sr., son Nickles C. Abbott, Jr., and grandson Nickles C. Abbott, III; three brothers, two sisters, three brothers-in-law and one daughter-in law. You are invited to leave kind words and fond memories at www.noblesfuneral.com.

Mrs. Janie Abbott, 83, of Shiro passed away Wednesday, December 21st at Lampstand Rehab and Nursing Home in Bryan, Texas. Visitation with family and friends will be from 5:00 &#8211; 7:00pm, Tuesday, December 27th at Nobles Funeral Chapel with... View Obituary & Service Information

The family of Janie Abbott created this Life Tributes page to make it easy to share your memories.

Send flowers to the Abbott family.