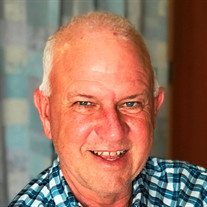 JC Thompson Jr. spent his 60 years here on earth full of life, achieving goals, and loving others well. He entered heaven on January 23, 2020, the same day his father passed 34 years ago. He was loved deeply by his family, and made a lasting impact on those whom he came into contact with. JC served his family and community well; he was a born leader and entrepreneur. His first job was at age 9, working at his uncle’s gas station in Temple, TX, and from there on the sky was the limit. He became an Eagle Scout at age 17 and put himself through college by rebuilding and selling VW Beetles. He married his college sweetheart Teri Doyle Thompson in 1981. They have 3 children, Jake, Tara, and Connor. One of his greatest joys was having a grandson, Callum, age 1. The majority of his career was in the automotive industry. He purchased a Ford dealership in 1988 in Navasota, TX, where he developed many lifelong friendships through employees, customers, and serving the community. He donated his time to the United Way Board and later became the President of the Chamber of Commerce and was on the Ducks Unlimited committee for over 22 years. He sold the dealership in 2007 and pursued his passion of raising a registered Beefmaster herd. In true JC style, after becoming involved in Beefmaster Breeder’s United, he served in many capacities: including President of a Beefmaster Satellite Group, supporting the Junior Beefmaster program and Vice President of the BBU Association. He was recognized for his accomplishments and awarded “Beefmaster Breeder of the Year” in 2014. Most importantly, he was a man of God. He proudly served as a deacon at First Baptist Church College Station, his church of 35 years. He participated in various mission trips, his last one being in July where he ran the kitchen and cooked for over 100 people. JC and Teri served with the college ministry and led the young adult ministry at church for the past 15 years. Some of JC’s favorite sayings include: “if you’re waiting on me, you’re backing up”, “holy moly”, and “on the other side of that coin.” He was a loyal friend, eternal optimist, a lifelong hunter, and enjoyed Sunday football. He loved his daily Sudoku. And was very competitive with his favorite domino game, 42. He is also survived by daughter-in-law Victoria Thompson and son-in-law Peter Vargas; as well as his siblings, Mark Thompson (wife Cathy) and Lisa Everett (husband Joey). A memorial service for JC Thompson, Jr. will be held Saturday, February 1st, 2020 at 11:00 AM at First Baptist Church, College Station. Please honor JC by wearing bright colors. Please bring a card for the family of your favorite memory with JC. In lieu of flowers, please consider a memorial contribution in his name to First Baptist Church College Station, 2300 Welsh Ave, College Station, Texas or Hospice Brazos Valley at 502 West 26th Street, Bryan, Texas 77801. You are invited to leave kind words and fond memories at www.noblesfuneral.com.

JC Thompson Jr. spent his 60 years here on earth full of life, achieving goals, and loving others well. He entered heaven on January 23, 2020, the same day his father passed 34 years ago. He was loved deeply by his family, and made a lasting... View Obituary & Service Information

The family of Mr. JC Thompson Jr. created this Life Tributes page to make it easy to share your memories.

Send flowers to the Thompson family.