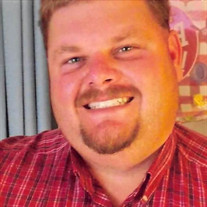 Jim-Bob Trant of Anderson, passed away Tuesday, January 12, 2021 at Baylor Scott & White Hospital in College Station. A celebration of his life will be held at 11:00am, Monday, January 18th at Zion Lutheran Church in Anderson with visitation beginning an hour prior to the service at 10:00am. Reverend Richard Lamb will officiate. Interment will follow in the Allen Family Cemetery (14600 FM 3090, Anderson Texas 77830) in Piedmont. Arrangements are under the direction of Nobles Funeral Chapel. Jim-Bob was born in Bryan, Texas on June 14, 1982 to Harold Bell “Bud” Trant, Jr. and Janice (Allen) Trant. Jim-Bob grew up in Grimes County learning about cattle and ranching from his grandfather, Cicero Allen, and his father, Bud Trant. Jim-Bob graduated from Anderson High School in 2000. He then attended Texas A&M University graduating in 2004 with a degree in Animal Science-Production. On September 25, 2010, Jim-Bob married the love of his life, Lauren Graves, at Trinity Lutheran Church in Navasota. Jim-Bob was claimed and cleansed through Holy Baptism and confirmed in Christ at Zion Lutheran Church in Anderson. He served Zion Lutheran Church in many capacities over the years. The highlight of Jim-Bob’s church service was his position as Head Elder. He loved serving the Lord by assisting with communion. Jim-Bob was proud of his Brahman cattle. His love of this breed began in 1991 with the purchase of his first Brahman show heifer. Brahmans sparked a passion that grew into a herd of magnificent show cattle. He became very knowledgeable of the breed. He loved to share his knowledge with the youth of Texas Junior Brahman Association where he served as youth advisor. He thoroughly enjoyed watching the youth develop a love for cattle as big as his love. While cattle were his passion, his family was his heart, pride, and joy. He was a devoted husband and father. Trace, Emma, and Will could always be found helping their father with his cattle and ranching. Jim-Bob is responsible for the interest and love of cattle that Trace has already developed in eight years of being his father’s right- hand man. After losing his mother five months ago, Jim-Bob was appointed to fill his mother’s shoes as Grimes County Treasurer. The citizens confirmed he was the man for the job by electing him in November. Jim-Bob lived a life of service. He was a member of the American Brahman Breeders Association, served on the Farm Service Agency as a committee member for Southern Grimes County, the Grimes County Historical Commission, and the Grimes County Beef and Forage Committee. As proud as he was of his service, his greatest accomplishment in life was his family. He was wholeheartedly devoted to his wife and children. Jim-Bob is survived by his wife Lauren, sons Trace and Will, daughter Emma, father Bud, brother R.P. and sister April, along with many friends. He was preceded in death by his mother, Janice Trant and grandparents: Cicero and Bernice Allen, and Harold and Rosealice Trant. Honoring Jim-Bob by serving as pallbearers are: Joe Ward, Joseph Klotz, Glenn Ruschhaupt, Joseph Schulze, Steve Wilkins, Brant Elliott, Jackson Lillich, and Cory Ripkowski. Members of Zion Lutheran Church will serve as honorary bearers. For those who desire, memorials may be made to the following: Jim-Bob Allen Trant Memorial Fund, First National Bank of Anderson, P.O. Box 159, Anderson, Texas 77830 OR Zion Lutheran Church, P.O. Box 409, Anderson, Texas 77830. Your are invited to leave kind words and fond memories at www.noblesfuneral.com.

Jim-Bob Trant of Anderson, passed away Tuesday, January 12, 2021 at Baylor Scott & White Hospital in College Station. A celebration of his life will be held at 11:00am, Monday, January 18th at Zion Lutheran Church in Anderson with visitation... View Obituary & Service Information

The family of Jim-Bob Trant created this Life Tributes page to make it easy to share your memories.

Send flowers to the Trant family.