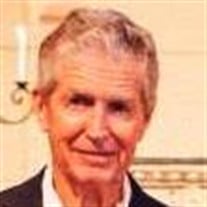 Jimmy McElroy, 76 of Shiro, passed away Wednesday, April 25th at the Med in College Station. Visitation with family and friends will be held from 5:00 – 7:00 pm, Sunday, April 29th at Nobles Funeral Chapel. Graveside services will be at 10:00am, Monday, April 30th at Rosewood Memorial Cemetery in Humble, Texas with Rev. Gary Ladd presiding. Arrangements are under the direction of Nobles Funeral Chapel. Jimmy was born in Houston, Texas on August 23, 1941 to Dan and Alta (Stutz) McElroy. He joined the U.S. Navy after graduating from high school and proudly served his country. Jimmy operated a crane for Cameron Iron Works for years and after his retirement from Cameron, he purchased and operated a meat market in Houston. He met and married Donna Parsons in Houston on September 20, 1986. He sold the meat market and together they purchased and operated a vending machine business. They also bought a place in Shiro that kept them busy on the weekends. Jimmy thoroughly enjoyed remodelling and renovating! Upon completion of their home, Jimmy and Donna made the move from Houston to Shiro. Jimmy enjoyed the outdoors, particularly hunting and fishing. He also enjoyed the occassional weekend casino trip to Louisianna. He was a Houston sports fan, and cheered for any of the teams from Houston, the Rockets, Astros and Texans, as well as the Texas Rangers. Left to cherish his memory are daughters and sons-in-law Debbie and Mark Smith of Hockley and Chris and Gary Bischoff of Shiro; sons and daughters-in-law David and Sheila Wheeler of Willis and Danny and Anne Marie McElroy of Shiro; brothers and sisters-in-law Robert and Pat McElroy of Houston and Johnny and Euna McElroy of Houston; grandchildren John Wheeler, Regina Wheeler, Melissa Reed, Cameron Smith, Erin Hughes, Kristen McElroy, Jenny Ladd, Sara Simmons, and Tyler McElroy; and great-grandchildren Olivia, Jenson, Reagan, Elaina, Rylan, Trenton, Tyler, Mason, Grant, Peyton, Ella Grace and Robert. Serving as pallbearers are Carmeron Smith of Hockley, John Wheeler, Kevin Reed and Rick Brown, all of Willis, Tyler McElroy of Cypress, Robert Simmons of San Antonio, Dillon Hughes of Navasota and Drew Ladd of Magnolia. Jimmy was preceded in death by his parents; wife Donna McElroy and first wife, Irene McElroy. You are invited to leave kind words and fond memories at www.noblesfuneral.com.

Jimmy McElroy, 76 of Shiro, passed away Wednesday, April 25th at the Med in College Station. Visitation with family and friends will be held from 5:00 &#8211; 7:00 pm, Sunday, April 29th at Nobles Funeral Chapel. Graveside services will be... View Obituary & Service Information

The family of Mr. Jimmy E. McElroy created this Life Tributes page to make it easy to share your memories.

Send flowers to the McElroy family.