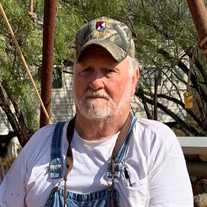 Not sure what to send?

Jimmy McMahon, age 76, formerly of Navasota and Jacksonville, Texas, passed away peacefully with beloved family members by his side on Saturday, December 18, 2021, in Houston, Texas. Visitation will be held at 9:30 am, January 25th at Nobles Funeral Chapel in Navasota, Texas, followed by a celebration of life that will be officiated by Richard Grahn at 11:00 am. Afterward, we ask for the family and close friends to join us for a gathering at Moody Ranch in Anderson, Texas at 12:30 pm. Jimmy was born January 4, 1945, to Lee and Frances McMahon in Jacksonville, Texas, where he attended school until he graduated in 1963. A few years after graduating, he was drafted into the United States Army and assigned to the 11th Armored Cavalry Regiment also known as “The Black Horse.” He was shipped overseas to serve in Vietnam where he achieved the rank of Buck Sergeant and was also awarded the Bronze Star for the valiant leadership of his platoon while encountering an unanticipated engagement. After returning home in late 1968, he moved his family to Louisiana where he and his brother operated a coffee service. In 1972, he decided to relocate to Navasota, where he met and made many lifelong friends. Through the next several years, Jimmy worked as a carpenter and eventually became an Ironworker/Glazier where he drove into Houston each day of the week. In the mid 1980’s, he started his own glazing contracting business and eventually moved to Houston to be closer to the growing construction industry and the many jobs he was contracted to do. He was once known by many in the industry to be the best glazier in Houston, especially when it came to specialty or difficult projects. This led to him being contracted to oversee many complex projects all over the United States as well as a lengthy job over in Saudi Arabia. After his retirement in 2011, Jimmy continued enjoying the many trips with his best friend, Zac Faulkenbury, to south Texas to prepare for and enjoy the annual hunting season. He was a proud Dad, PawPaw, great-PawPaw and father-in-law. He cherished his time with his family and friends and if you knew him well, he was witty, humorous, never lacked in conversation, and would always be there for you if you needed him. He is survived by his son, Jimbo McMahon (Kimberly); his love of 16 years, June Smith; bonus daughter, Debra Orlando (Jimmy); grandchildren, Micaela Golden (Kellon), Madeline McMahon (Daniel), Michael Medinger (Cierra), Skylar Gonzales (Francisco), Logan Gorski and Morgan Schmidt; great-grandchildren Asher and Ella; nieces, Michele Martin, Kendra Finch and Denise McMahon; great-nieces, a great-nephew, many cousins and bonus grandchildren. Jimmy was preceded in death by his parents Lee and Frances McMahon; brother, Kenneth McMahon and his daughter, Jennifer McMahon. In lieu of flowers, the family asks that memorial contributions in his memory be made to The American Cancer Society @ www.cancer.org. You are invited to leave kind words and fond memories at www.noblesfuneral.com.

Jimmy McMahon, age 76, formerly of Navasota and Jacksonville, Texas, passed away peacefully with beloved family members by his side on Saturday, December 18, 2021, in Houston, Texas. Visitation will be held at 9:30 am, January 25th at Nobles... View Obituary & Service Information

The family of Jimmy McMahon created this Life Tributes page to make it easy to share your memories.

Send flowers to the McMahon family.