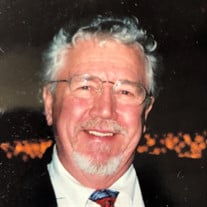 Jimmy Lain Nash, 78 of Anderson, passed into eternal rest on February 13, 2021, at home. He had suffered from congestive heart failure for some time. Graveside services will be held at 2:00 pm, Monday, March 1st at Fairview Whitehall Cemetery. Arrangements are under the direction of Nobles Funeral Chapel. Jimmy was an active, vibrant gentleman who loved baseball and coaching Little League with a passion. He was an avid hunter, pool player, and woodworker. The last years of his professional life were spent restoring Texas’ old courthouses. His respect for these majestic old buildings and their original builders was one of the reasons for his success in this field. Jimmy was a founder of the Central Texas Pool League and an enthusiastic player in the league games until his sight began to fade, making his usual miraculous shots impossible. He was a great admirer of live theater and attended most MSC OPAS programs during his wife’s tenure there. Known by myriad students as “New York Jimmy,” he joined the group of volunteers going to the arts presenters annual meeting in New York, hence the nickname! He loved Broadway musicals and equally loved attending concerts at Carnegie Hall as well as services on Sunday at St. Thomas Episcopal Church on Fifth Avenue. Locally, he was a member of St. Paul’s Episcopal Church in Navasota. Jimmy Nash was born June 8, 1942, in Bryan. He graduated from SFA High School, attended Allen Academy, and earned a baseball scholarship to Sam Houston State University. He is survived by his wife Sarah Siddall Nash of Anderson; daughter Allison Dowling of Bryan; daughters Evelyn Van Pelt Griffin of White Hall; Elizabeth Van Pelt Bassett (husband Eric) of Oologah OK; son Jeromy Nash of San Antonio. Grandchildren are Andrew Pullen and Brayden Dowling of Bryan, Katie Griffin Jackson (husband Cody) of Brandon MS; Zach Griffin of Lubbock; Jacob Wilson and Sarah Wilson of Oologah OK and Pflugerville; Alix and Jaime Nash. He is also survived by his great granddaughter Emily Grace Jackson of Brandon MS. The family is so very grateful to Allumine Hospice’s staff, especially Tonya Scott, R.N. and her team members, and to Visiting Angels Caregivers, especially Patricia Varnegas and Salina Lindley. In lieu of flowers, the family suggests a memorial contribution be made in his name to St. Paul’s Episcopal Church, Navasota, Texas. You are invited to leave kind words and fond memories at www.noblesfuneral.com.

Jimmy Lain Nash, 78 of Anderson, passed into eternal rest on February 13, 2021, at home. He had suffered from congestive heart failure for some time. Graveside services will be held at 2:00 pm, Monday, March 1st at Fairview Whitehall Cemetery.... View Obituary & Service Information

The family of Mr. Jimmy Lain Nash created this Life Tributes page to make it easy to share your memories.

Jimmy Lain Nash, 78 of Anderson, passed into eternal rest on...

Send flowers to the Nash family.