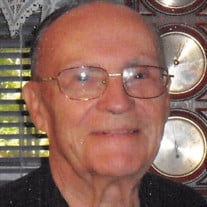 Mr. John Alan Gaydon, 88, of Navasota, passed away Tuesday, February 23, at CHI St. Joseph College Station Medical Center. Visitation will be held Thursday, February 25, from 2:00 – 4:00 PM at Nobles Funeral Chapel. Funeral services will be Friday, February 26, at 10:00 AM at the funeral home with the Rev. Chad McMillan officiating. Interment will follow in Oakland Cemetery. Arrangements are under the direction of Nobles Funeral Chapel. John was born in Ringgold, TX, on November 14, 1932, to John Alec and Velma (Bradley) Gaydon. He married Virginia “Juanette” Vannoy in Palestine, Texas on March 16, 1957 and they had one child, Jana Lanette Gaydon. John moved his family from Palestine to Navasota in 1975 when he accepted the Administrator position available at the then Sweetbriar Nursing Home. He later went to work for Interstate Southwest Forge, where he worked over 20 years until his retirement. John will be remembered as a fair, honest man, reserved and kind in demeanor and generous and loving to his family and friends. His wife, Juanette, was the love of his life and his best friend for almost 64 years. He was a devoted husband, father and grandfather in every sense of the word and in their company was his favorite place to be. He was preceded in death by his parents and sister Neva Jones. Mr. Gaydon is survived by his wife Juanette Gaydon of Navasota; daughter Jana Lanette Gaydon Dominguez and husband Johnnie, Jr. of Navasota; brother Billy Ray Gaydon, Sr. of Colorado; sisters, Brenda Warren and husband Wade of Mount Pleasant and Pattie Lynn Gray of Elkhart; grandchildren, Jason Dominguez and wife Alma, Johnnie Dominguez, III and wife Heather, and Jennifer Estrada and husband Matthew; and great-grandchildren, Brianna Diaz, Aidan Rueda, Ian Miles Rueda, Jayce Dominguez, Addison Dominguez, McKinley Faith Dominguez, Riley Kate Dominguez, and Zane Ryder Dominguez. Serving as pallbearers are Johnnie Dominguez, Jr., Jason Dominguez, and Johnnie Dominguez, III. For those that desire, memorial contributions may be made to the Anderson Church of Christ, PO Box 246, Anderson, TX 77830. The family invites you to leave fond memories or kind words at www.noblesfuneral.com.

The family of Mr. John Alan Gaydon created this Life Tributes page to make it easy to share your memories.

Send flowers to the Gaydon family.