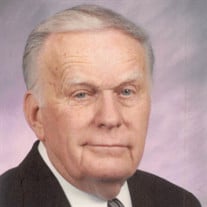 Dr. John Compton Webb, 91 of Navasota, passed away on Monday, January 29, 2018. Visitation with family and friends will be held from 5:00 – 7:00pm, Thursday, February 1st at First Baptist Church of Navasota. A celebration of his life will be at 10:00am, Friday, February 2nd, also at the church with interment to follow in Oakland Cemetery. Rev. Clyde Larrabee will officiate. Arrangements are under the direction of Nobles Funeral Chapel. Dr. Webb was born February 4, 1926 in Teague, Texas, the son of Clyde and Ione White Webb. Dr. Webb, affectionally known as Johnny, was preceded in death by his parents and by his sisters Betty Webb Joinville, Martha Sue Webb Holliman, and Wanda Webb Arnold. Growing up in Fairfield, 90 miles north of Navasota, John Webb was strongly influenced by his parents and several different teachers. His mother was a former schoolteacher and, along with his father, stressed self-discipline to be successful academically and athletically. While attending Fairfield High School, he was quarterback and captain of the Eagles’ first championship football team. Following three years in the Merchant Marine, serving in the Pacific during World War II, John Webb earned a bachelor of science degree from Sam Houston State University in Huntsville. He earned a master’s degree, also from Sam Houston, in 1953 and his doctorate degree, from Texas A & M University in 1971. Dr. John Webb was the oldest of eight children, all of whom have earned at least one college degree. In 1950, Dr. Webb joined the Navasota ISD as a junior high history teacher and coach, where he organized the school’s first football team and named them the “Fangs.” He joined the faculty of Navasota High School as coach, mathematics and distributive education teacher in 1953. That year, with Dr. Webb as assistant coach, the Rattler football team tied with Brenham for the district title and returned the following year to take the crown. Dr. Webb was made head coach in 1955 and his team earned second in district, only to garner the bi-district title in 1965. He was named elementary principal in 1957 and high school principal in 1958 before taking over the assistant superintendent’s job in 1959, serving three years before being named Superintendent in 1961. Dr. Webb served as Superintendent for the next 26 years, until his retirement in 1987. The first local Little League baseball program in Navasota was organized by Dr. Webb, and the city’s first field was named in his honor. He served as president of the Grimes County Library Board, the Grimes County Heritage Association, the Navasota Lions Club, and the Navasota Kiwanis Club. The first library was constructed while he was president of the Library Board. Dr. Webb served as Scoutmaster and was district chairman of the Boy Scouts of America from 1952 – 1964. He was active in Campfire Girls, the Grimes County United Way, Navasota Band Boosters, and Rattler Boosters. Johnny served as deacon, deacon chairman, Sunday school teacher, and Sunday school superintendent of the First Baptist Church of Navasota. He also served on the Board of Directors of the Bank of Navasota. In his role as an educator, Dr. Webb was president of the Southeast Texas Schoolmaster’s Club and president of the Grimes County unit of the Texas State Teachers Association. He held membership in the PTA, Texas and National Association of School Administrators, Navasota Classroom Teachers Association, and the Region IV Computer Board of Houston. Johnny held life memberships in the Texas Congress of Parents and Teachers and the FFA, and received state awards from the DECA and the Texas State Teachers Association. Dr. Webb was a 1985 finalist for the title of “Texas Superintendent of the Year.” He was most proud of being honored by the local school board when a newly constructed school was named the John C. Webb Elementary School. Survivors include his loving wife of 67 years, Aminuan Saylors Webb, daughter Cynthia Brooks Winton, and husband James C. Winton of Houston, son John C. Webb, Jr. and wife Sue Pool Webb of College Station, and seven grandchildren including Christopher Brooks, and wife Molly of Houston, Webb Brooks of Kansas City Missouri, Chris Winton and wife Genevieve, Matt Winton and wife Mandy, all of Houston, Sue Ellen von Merz and husband Carl, of Houston, Hallie Mancuso and husband Cory, and Ashlyn Webb, all of Austin. Also surviving are 15 great grandchildren all of Houston and Austin. Dr. Webb is also survived by his brothers Billy Webb and wife Barbara of Seattle, Washington, Max Webb and wife Diane of San Antonio, Solon Webb and wife Phyllis of Portland Oregon, and George Webb of McKinney. He is also survived by numerous nieces, nephews and many wonderful lifelong friends. You are invited to share fond memories and kind words at www.noblesfuneral.com. The family wishes to thank the dedicated, loving staff at Navasota Nursing and Rehabilitation center and Traditions Hospice for the wonderful care they provided to Dr. Webb and his family. The family requests, for those wishing to donate in Dr. Webb’s memory, that donations be made to the First Baptist Church of Navasota.

Dr. John Compton Webb, 91 of Navasota, passed away on Monday, January 29, 2018. Visitation with family and friends will be held from 5:00 &#8211; 7:00pm, Thursday, February 1st at First Baptist Church of Navasota. A celebration of his life... View Obituary & Service Information

The family of Dr. John Compton Webb created this Life Tributes page to make it easy to share your memories.

Dr. John Compton Webb, 91 of Navasota, passed away on Monday,...