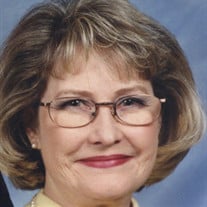 Mrs. Johnnie S. Greer, 72, of Roans Prairie passed away Saturday, February 27th at St. Joseph Regional Hospital in Bryan. Visitation with family and friends will be from 5:00 – 7:00pm, Tuesday, March 1st at Nobles Funeral Chapel. A celebration of her life will be Wednesday, March 2nd at 10:00am, also at the funeral home. Rev. Dawson Skow will officiate. Mrs. Greer will be interred in Oakwood Memorial Gardens, in Gardendale, Alabama. Arrangements are under the direction of Nobles Funeral Chapel. Johnnie was born December 30, 1943 in Navasota to John Stone and Ebbie (Howard) Stone. She married David “Mike” Greer in December of 1989 in Anderson. She was a secretary for the public school system for many years. She is survived by her loving husband, Mike Greer of Roans Prairie; daughters and son-in-law Cheli and Todd Greene of Roans Prairie and Diona and Jody Hightower of Birmingham, Alabama; son and daughter-in-law Brandon and Melissa Greer , also of Birmingham; grandchildren Sean Winn and fiancé Kelsey Klaevemann, Trevor Hightower, Travis Hightower, Alexa Hightower and Michael Connor “Mac” Greer. Serving as pallbearers are Sean Winn, Trevor Hightower, Travis Hightower, Mac Greer, Todd Greene, Jody Hightower and Brandon Greer. Preceding her in death were her parents, sister Elizabeth Neff and grandson Michael Greene. In lieu of flowers, the family asks that you consider a contribution in her memory to the Leukemia and Lymphoma Society, 1311 Mamaroneck Avenue, Suite 310, White Plains, NY 10605 or by going to the LLS website at www.lls.org. You are invited to leave kind words and fond memories at www.noblesfuneral.com

The family of Mrs. Johnnie S. Greer created this Life Tributes page to make it easy to share your memories.

Send flowers to the Greer family.