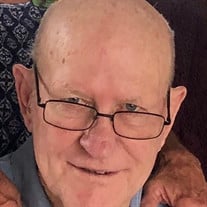 Johnnie Frank Griffith, 77 of Plantersville, passed away peacefully in his home surrounded by his family on Friday, April 9, 2021. A graveside service will be held on Saturday, May 1st at 1:00 pm at the Smith-Floyd Family Cemetery in Plantersville. A potluck gathering at the family home will follow. Cremation arrangements were entrusted to Nobles Funeral Chapel. Johnnie was born in Houston, Texas on September 10, 1943 to Carl W. Griffith, Sr., and Frankie M. (Dye) Griffith. He graduated from Aldine High School in 1961 and later served his country in the U. S. Air Force. He worked for Scurlock Oil, Scurlock Permian and Marathon Oil, retiring after 30 years of servie. After retirement, he went to work for Spring ISD. Even though he spent most of his life in the oil industry, he found the most rewarding job helping students which he talked about regularly. His hobby was sports. He played softball all the way into his 50's, then continued by umpiring until he couldn't anymore. Bowling was another sport he enjoyed his whole life, even meeting the love of his life at the bowling alley. On July 8, 1967, Johnnie married his forever love, Frances Louise Hyman. Together they raised two loving children, Tyrone Griffith and Melody (Griffith) Stoker. In 2006, they moved from Houston to Plantersville to continue their life together. Johnnie is survived by his wife of 53 years, Frances; son and daughter-in-law Tyrone and Shelby Griffith of North Richland Hills; daughter and son-in-law Melody and Ryan Stoker of Navasota; six grandchildren and five great-grandchildren; sister Dorothy Jaztlau; brother Ronald Griffith and several nieces and nephews. He was preceded in death by by his parents; oldest brother, Carl W. Griffith, Jr.; youngest sister, Linda Schindler; niece, Monica Kominczak; nephew, James Lee Mann and great-granddaughter, Heziabah Lavon Kuehne-Duncan.

Johnnie Frank Griffith, 77 of Plantersville, passed away peacefully in his home surrounded by his family on Friday, April 9, 2021. A graveside service will be held on Saturday, May 1st at 1:00 pm at the Smith-Floyd Family Cemetery in Plantersville.... View Obituary & Service Information

The family of Mr. Johnnie F. Griffith created this Life Tributes page to make it easy to share your memories.

Send flowers to the Griffith family.