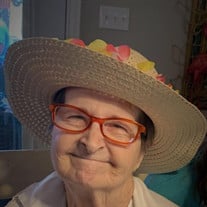 Jonabeth “Beth” Fair Downing, 79 of Navasota, passed away Saturday, February 19th. A celebration of her life will be held at 11:00 am, Thursday, February 24, 2022 at First United Methodist Church in Navasota with Rev. Jeremy Woodley officiating. Arrangements are under the direction of Nobles Funeral Chapel. Beth was born in Fort Worth, Texas on January 19, 1943, and adopted at birth by parents John B and Eula Stuckey Fair. She was raised in Abilene, Texas and later moved to Hunt, Texas. She studied in Hawaii for a semester during high school. She attended Southwestern University in Georgetown, Texas where she was a member of Tri-Delta sorority. While there she met Clarence Ray Downing of Navasota. They married in Hunt, Texas in August 1963 and were married fifty years. For most of their married life they made their home in Navasota, where Clarence was a CPA. It was here they raised their children, son Brad and daughter Mary Elizabeth “Meme”. Beth was preceded in death by her parents, her husband Clarence and her daughter, Meme. She is survived by her son, Brad, his wife Jenny, and granddaughters Kaley and Savannah. Beth spent many years in service to her community, including serving on the Grimes County Child Welfare Board and was elected and served to the Navasota City Council. She was a faithful member of First United Methodist Church of Navasota where she served as Financial Secretary and on other committees. Beth kept a close friendship with several former pastors. Beth’s catering business, A Catered Affair, was the venue for many parties, rehearsal dinners as well as clubs, school and business dinners. Most requested was her mouthwatering roast. Beth enjoyed spending time with family and friends. She traveled to the Holy Land and often spoke of that experience. Her true joy was her granddaughters, whom she adored. With the loving care of her son Brad and his wife Jenny, Beth courageously fought cancer in order to spend just a few more years enjoying them. Beth held a special place in her heart for The Edna Gladney Home, an adoptive agency for children in and around Fort Worth, as wells as the birth parents, adoptive parents and adopted children that all became a part of The Gladney Home. Beth loved fiercely and lived life on her own terms. Although those who knew her may not have always agreed with her they always knew where she stood on matters and that her intentions were honorable. Serving as pallbearers are Gordon Langston, Russell Richards, Nic Richards, Joe Young, Blake Lauter, and Shane Prescott. Honorary bearers are Larry Dohmen, Glenn Todd, Zedekiah Riley, Mike Harris, Richard Hereford, Bill Hertenberger, Bill Miller, B.J. Gruner, Gig Langston, Robert Richards, Robert Shields, Mac Vaughn, Bobby Brewton, Michael, Prescott, Chad Ross, Don Sowell, Luke Scamardo and Mike Pride. Special thanks to Dr. Luke Scamardo for his dedication and care through the years. In lieu of flowers, a memorial contribution may be made to the Edna Gladney Home @ www.iamgladney.org/donate. You are invited to leave kind words and fond memories at www.noblesfuneral.com.

Jonabeth &#8220;Beth&#8221; Fair Downing, 79 of Navasota, passed away Saturday, February 19th. A celebration of her life will be held at 11:00 am, Thursday, February 24, 2022 at First United Methodist Church in Navasota with Rev. Jeremy Woodley... View Obituary & Service Information

The family of Mrs. Jonabeth "Beth" (Fair) Downing created this Life Tributes page to make it easy to share your memories.

Send flowers to the Downing family.