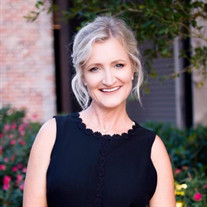 Mrs. Joni Winfree Harsh, 54, of Shiro, passed away Sunday, July 18th, at her home. A celebration of her life will be held Friday, July 23rd, at 6:30 PM at Lonestar Cowboy Church in Montgomery TX. Joni was born in Lake Charles, LA, on February 11, 1967, to Charles and Lynn (Tullos) Winfree. After moving to Houston with her mom and brothers in the early 70’s, she attended Spring Branch ISD schools, where in high school she met her husband, David. Joni and David married in 1986, and went on to have 5 children. Joni homeschooled each of the children for a period of time, and later went on to teach at Alpha Omega Academy in Huntsville TX. Not only did Joni have a passion for teaching, but she did for writing as well. She wrote and published a k-12 homeschool curriculum, as well as 2 childrens books, and left behind a few unfinished projects. At the age of 40, Joni returned to her own schooling and completed her college degree from Liberty University. In recent years, Joni grew a passion for yoga and flew out of state to become certified in YogaFaith, a Christ centered approach to the traditional practice of yoga. She began teaching yoga classes, while always spreading the love of Christ through everything she did. Joni was diagnosed with pancreatic cancer in July of 2020 and fought a long, hard battle. She is survived by her mother, Lynn Winfree, her brothers, Chuck Winfree and Craig Winfree, her husband, David, son Nathan Harsh and his daughter Hayes, daughter Skylar Eike and her husband Evan and children, Eli and Ava, son Hunter Harsh and his wife Hannah, daughter Naomi Smith and her husband Seth and children Silas and Stella, and son Wyatt Harsh. Joni was preceded in death by her grandmother Bobby Styron, and father, Charles Winfree. For those that desire, memorial contributions may be made in her name to the Pancreatic Research Fund at www.pancan.org/donate.

Mrs. Joni Winfree Harsh, 54, of Shiro, passed away Sunday, July 18th, at her home. A celebration of her life will be held Friday, July 23rd, at 6:30 PM at Lonestar Cowboy Church in Montgomery TX. Joni was born in Lake Charles, LA, on February... View Obituary & Service Information

The family of Mrs. Joni Winfree Harsh created this Life Tributes page to make it easy to share your memories.

Send flowers to the Harsh family.