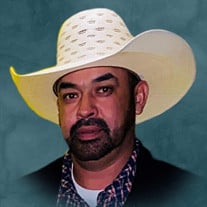 Mr. Jorge Quirino, 45 of Navasota, passed away Saturday, February 22nd. Visitation with family and friends will be held from 5:00 – 7:00 pm, Friday, February 28th at Christ Our Light Catholic Church in Navasota, with a parish rosary following at 7:00 pm. A funeral Mass celebrating his life will be at 10:00 am, Saturday, February 29th, also at the church. Rev. Elias Lopez will be the celebrant. Rite of Committal will follow in Oakland Cemetery. Arrangements are under the direction of Nobles Funeral Chapel. Jorge was born in Rio Grande, Zacatecas Mexico on April 23, 1974 to Demetrio Quirino and Urbana Juarez. He married Laura Isela Ramirez on July 24, 1996 in Waco, Texas and together they had three children. Jorge had a strong work ethic, and he was gifted with the ability to create something out of nothing. He utilized this gift in many areas, particularly in the carpentry trade. Horses were his passion, he enjoyed raising, training, and going on trailrides as well as sharing the love of horses with others. He was an energetic, larger than life personality who loved to joke, dance and help anyone needing a hand. His family was his number one priority, making sure they always had everything they needed and more. Jorge is survived by his wife, Laura Quirino; mother, Urbana Juarez; sons Jorge and Adriel Quirino; daughter Aileen Quirino; brother and sister-in-law Juan Quirino and Leticia Ramirez; and sister and brother-in-law Maria and Ulises Gonzalez. Serving as pallbearers are Jorge Quirino, Benjamin Ramirez, Marco Ramirez, Jose Ramirez, Juan Quirino, Alexis Quirino, Ulises Gonzalez and Adriel Quirino. He was preceded in death by his father, Demetrio Quirino. You are invited to leave kind words and fond memories at www.noblesfuneral.com.

Mr. Jorge Quirino, 45 of Navasota, passed away Saturday, February 22nd. Visitation with family and friends will be held from 5:00 &#8211; 7:00 pm, Friday, February 28th at Christ Our Light Catholic Church in Navasota, with a parish rosary following... View Obituary & Service Information

The family of Mr. Jorge Quirino created this Life Tributes page to make it easy to share your memories.

Send flowers to the Quirino family.