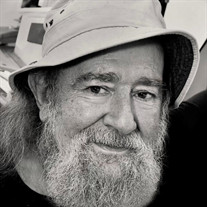 Joseph “Joe” George Babcock, passed away September 7, 2021 at the age of 75. He was surrounded by his wife of 51 years and family and as they sang “Amazing Grace”. He will be remembered as a creative, eccentric, dreamer, carpenter, and boatbuilder; always thinking up his next wild project or next addition to his “castle in the woods”. Joe’s building skills were seen at Cinderella’s Castle at Walt Disney World, the numerous ships of Windjammer Barefoot Cruises, his construction of the ‘Graceful Ghost’ steamboat as well as the ‘Tinker Tug’, his last boatbuilding adventure. He was always dreaming up new ways to add to his tale and left many shaking their heads. Joe was like none other and often referred to as “Captain Joe” or “Noah” for his grand boatbuilding in the woods near absolutely no body of water. While many thought of him as crazy, he was also one of the smartest men many have ever known; always lending a helping hand to the many that came to him for advice on their projects. Joe could build anything or dream up ways to make things that many could never imagine. He wanted his work to be the best and always wanted to teach people “the right way to do it.” Joe was wheelchair bound but spent the last 30 years of his life proving he wasn’t fully disabled to everyone. His legacy follows him in the New York Times, Texas Monthly, Texas Country Reporter, and several other news groups and books including: “The Ship & the Storm,” and “Barefoot Pirate: The Tall Ships and Tales of Windjammer. Joe’s life was quite the story and it touched many. Joseph leaves behind his dear wife: Mona Annelise (Thoro) Babcock, daughters: Tiffany Dawn Christman, Michelle Annelise Babcock, sons: Michael Joe Babcock, Nicholas Dale Babcock, grandchildren: Paige Alexis-Hayleigh Babcock, Kayla Annelise Serota, Carter Jameson Babcock, Cameron Alexander Babcock, and brothers: William Bert Babcock & Robert Owen Babcock. He was preceded in death by father: Joseph Hermann Babcock, mother: Dorothy (Thompson) Babcock and brother: James Hermann Babcock

The family of Joseph "Joe" George Babcock created this Life Tributes page to make it easy to share your memories.

Send flowers to the Babcock family.