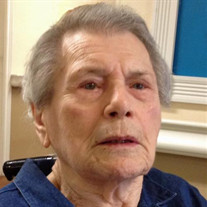 Josephine Boggess Floyd, 98, a lifelong resident of Anderson Texas and member of Anderson Baptist Church, passed away on June 28, 2017 in Houston, Texas. Interment will be in the Odd Fellows Cemetery in Anderson, with a memorial service to be held at the Anderson Baptist Church at 1:00 p.m. on Saturday, July 8, 2017. Associate Pastor Randy Turner will officiate. Arrangements are under the direction of Nobles Funeral Chapel. Josephine was born December 10, 1918, in Anderson to Lovett Thomas and Annie Chaney Boggess. She married Dan Ike Floyd on October 25, 1944. They had one child, William F. (Bill) Floyd of Houston. Josephine is survived by her son and by her daughter-in-law, Janice McDaniel Floyd, of Houston, grandchildren, Laura Leszinske and her husband Bill of El Dorado Hills, California, and Dan Floyd and his wife Tracy Manier of Austin. She is also survived by great grandchildren, Charlotte, Caroline and Will Leszinske of El Dorado Hills, California, and Eli and August Floyd of Austin, a nephew, Lovett T. Boggess and his wife Pat of Anderson, and a niece, Leah Burkhalter and her husband Kenneth of Conroe. Josephine was preceded in death by her husband, Dan Ike Floyd, her parents, her sister, Eugenia Boggess McKinney, and her brother, John H. Boggess. Josephine was smart, strong, independent, and loving toward her family, her many friends and her church. She worked as a Deputy Tax Collector for about 40 years, and during that time it was said that she knew everyone who lived in Grimes County. Her hobbies were cooking and collecting cookbooks—two thousand of them at one point. Her family always enjoyed the benefits of her hobby, as did her church and community. Her family fondly remember her Christmas cookies, pimento cheese, pecan pies, lemon cakes, pralines and cheese balls. Josephine was an energetic, robust woman. She was still living independently at 94, driving her own car, attending church on Sundays, and visiting with friends daily at the Sunshine Center. For the past four years she has lived in Houston at Brookdale Senior Living where she was known to all as their beloved Jo Jo. Those who remain miss her greatly. In lieu of flowers, the family suggests a donation to the Anderson Baptist Church, 379 S Main St, Anderson, TX 77830. Phone: (936) 873-3363.

Josephine Boggess Floyd, 98, a lifelong resident of Anderson Texas and member of Anderson Baptist Church, passed away on June 28, 2017 in Houston, Texas. Interment will be in the Odd Fellows Cemetery in Anderson, with a memorial service to... View Obituary & Service Information

The family of Mrs. Josephine Boggess Floyd created this Life Tributes page to make it easy to share your memories.

Customized sympathy cards. Mailed for you.