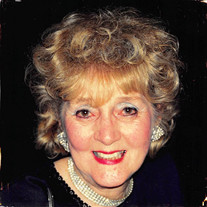 Juanita Wilene Winfree Shive, age 91, died on Friday, April 6th at her home in Navasota surrounded by her loving daughters. A celebration of her life will be held at 3:00pm, Tuesday, April 10th at First United Methodist Church of Navasota with interment to follow in Oakland Cemetery. A vistation with family and friends will begin one hour prior to the service at 2:00pm. Rev. Jeremy Woodley will officiate. Arrangements are under the direction of Nobles Funeral Chapel. Gigi, or Granny, as she was affectionately called, was born in Monaville, Texas to Cloie Styers Winfree and Leonard Wyatt Winfree. She was raised in Hempstead where she helped out in the family business, Winfree’s Supermarket. She attended Hempstead High School, and she loved to reminisce about her days as a cheerleader and the drum major for her beloved Hempstead Bobcats. During her senior year, she was voted Most Popular by her classmates. After graduation and World War II, Juanita married Willie Ross Shive of Navasota on August 3, 1945. They spent their early years in Pasadena, Texas. Willie worked for Shell Oil Co., while Juanita devoted her time to raising their four daughters. Juanita was always theatrical and helped as a founder of the Pasadena Little Theater, where she loved performing on stage. In 1960, the Shive family moved back to Navasota where Juanita and Willie spent their last years together. While Willie was busy dealing with his various business interests, Juanita became involved in all aspects of the community and her church. As a member of the First United Methodist Church, she was chairman of the Hospitality Ministry team for many years, where she was known as the “Kitchen Lady”. She was a member of the Tuesday Bible Study and the United Methodist Women. In 1991, her church honored her as its Layperson of the Year because of her many years of evangelism. She was also appointed and served on the Methodist Texas Conference Board of Ministry. Juanita loved performing for a number of years in the Navasota Lions Club talent productions, under her stage name “Sugah Shive” and her tap dancing abilities became well known throughout her community. She was a longtime member of the Navasota “21” Club and was a director of the Edgewood Country Club during its existence where she loved socializing with her good friends. She was active in helping the Grimes County Ministerial Alliance organize the VFW World Day of Prayer and contributed to the Wounded Warrior and Paralyzed Veteran projects. Juanita was founder and co-chairman of the American Cancer annual fundraising drive, was active in the Relay for Life program raising cancer awareness, helped organize the 2001 Navasota High School Shattered Dreams project, and was an active member of the United Way. She was honored as the Navasota/Grimes County Chamber of Commerce Citizen of the Year in 2006. Juanita was an active member of the Robert Raines chapter of the National Society of the Daughters of the American Revolution. Together, she and Willie loved traveling all over the country to the World War II U.S. Air Force Flying Tiger reunions where Willie served as a National Director of the organization. Juanita loved visiting the local nursing homes and entertaining the residents with her tap dancing and storytelling. She instilled a love of music and dancing in her children, grandchildren and great-grandchildren and was always either performing for them or they were performing for her. We will miss our mother and grandmother dearly in her important role as the family matriarch; there will never be another “Granny” like her! We know, without a doubt, that when the Heavenly Father takes her into His loving arms, He will proclaim, “Well done, my child!” Juanita was preceded in death by her husband, Willie Ross Shive; her parents Leonard and Cloie Winfree; parents-in-law Roy and Lucille Shive; brother Hartwell Sanders Winfree; nephew Travis Keith Winfree; grandson Jeffrey Scott Dixon and sons-in-law Jerry Todd and James Lokey. She is survived by daughters Cynthia Todd; Bonnie Lokey, Lynda Dixon and husband Don and Marcy Frede and husband Chuck; brother and sister-in-law Travis and Susan Winfree; sister-in-law Nelda Shive; brother-in-law Dave Matney and wife, Linda; grandchildren Kerry Kooken, Kris Kooken, Lauren Lane Ahrendt, Lance Lane, Julie Dixon Galle, Charlie Frede, Laura Frede Goodie and Jacy Boring Champion; 13 great-grandchildren; extended family Suzi Robertson, Nolen Holcomb, Robby Wood, Robbie Dixon and daughter, Haley Dixon and scores of others who affectionately called her “Granny”. The family would like to especially thank her caregivers Delores Montes, Susie Delgado, Anita Melchor, Dr. Garth Morgan and Traditions Hospice. In lieu of flowers, memorials may be sent in her name to the First United Methodist Church of Navasota or any charity of your choice. You are invited to leave kind words and fond memories at www.noblesfuneral.com.

Juanita Wilene Winfree Shive, age 91, died on Friday, April 6th at her home in Navasota surrounded by her loving daughters. A celebration of her life will be held at 3:00pm, Tuesday, April 10th at First United Methodist Church of Navasota with... View Obituary & Service Information

The family of Mrs. Juanita Wilene (Winfree) Shive created this Life Tributes page to make it easy to share your memories.

Send flowers to the Shive family.