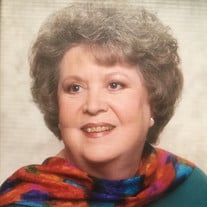 Judy Blackbird Cooper, 81 of Katy, passed away Sunday, November 3rd at the Caydance Assisted Living Center in Katy, Texas. Graveside services will be held at 1:00 pm, Wednesday, November 13th at Plantersville Cemetery in Plantersville, Texas. Rev. David Huegel will officiate. Arrangements are under the direction of Nobles Funeral Chapel. Judy was born in Cushing, Oklahoma April 25, 1938, one of two daughters born to Alfred and Mary Moffitt Blackbird. She grew up in Houston, Texas and graduated from Mirabeau Lamar High School in 1955. She enrolled in and attended the University of Texas until she met her first husband, Wayne Morrison, who was in the U.S. Air Force and stationed in San Antonio, Texas. She left school when she married him in 1957. She had her first child, Michael Glen (Glen) Morrison, while still stationed in San Antonio, on May 17, 1959. After her husband was discharged, they moved to Houston and had their second child, Janet Lee (Jan) Shepperd on April 17, 1961. She became a single mom in 1965, remarried in 1967 and moved to Clear Lake City, where her husband was a commercial artist for NASA by day and a musician by night. After a few years, she moved back to Houston, worked as a medical transcriptionist and raised her children in West University Place. She started taking flying lessons at Hooks Airport in Spring, Texas in 1977 and obtained her license in 1978. For many years thereafter, she spent her weekends with friends/fellow pilots and they routinely took excursions to nearby destinations for lunch, shelling, shopping, etc. Once her children were grown, she moved to Montgomery and lived there for many years until she bought a home and moved to Tomball, Texas to be closer to her parents who had retired in Plantersville, Texas. Judy enjoyed reading, genealogy, word games, and travelling. Throughout her life she visited Alaska, Canada, England, Ireland, Mexico, Paris and Scotland, among other places. Judy is survived by her daughter and son-in-law, Janet and Sidney Shepperd; sister and brother-in-law, Mary and Larry Blackwell and grandsons Alexander Morgenegg and Anthony Morrison. She was preceded in death by her parents and son Michael Glen Morrison. In lieu of flowers, the family suggests that memorial contributions be made in her name to the following charities: The Abandoned Animal Rescue at www.aartexas.org OR The Wounded Warrior Project, https://support.woundedwarriorproject.org. You are invited to leave kind words and fond memories at www.noblesfuneral.com.

The family of Mrs. Judy Blackbird Cooper created this Life Tributes page to make it easy to share your memories.

Send flowers to the Cooper family.