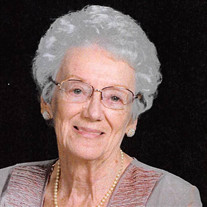 Kathryn Ann (Gabriel) Briers of Anderson, TX, passed away on Tuesday, August 8, 2017. Visitation with the family will be held from 5 to 7 p.m. on Thursday, August 10, at St. Stanislaus Catholic Church, Anderson, TX, with a rosary to follow at 7. Funeral services, celebration of her life, and Mass are scheduled for 10 a.m. Friday, August 11, at the church, with interment to follow at St. Stanislaus Cemetery. St. Stanislaus Altar Society will provide a luncheon in the fellowship hall following the services. All are under the direction of Nobles Funeral Chapel of Navasota, Texas. While it was tough for her to leave the ranch between Anderson and Carlos, she decided two years ago to move to Carriage Inn in Bryan, Texas, where she enjoyed many new friends and lots of shopping and eating trips, and special time with her best friend, her daughter Joanne Briers Isbell. Then, in January, 2017, she experienced the first of two major surgeries to repair an aortic aneurysm. She bounced back from the first to return to her independent living apartment at Carriage Inn. She never really recovered from a second surgery in June, 2017, with stays at the Manor Skilled Nursing, St. Joseph’s Hospital, and Hospice Brazos Valley. Kathryn was a long-time member of St. Stanislaus Catholic Church, Anderson, Texas. Her faith and her family—BOTH LARGE—were her passions. (Well, those, and she liked a glass of wine and a frozen margarita!) She is survived by her five children and their spouses: Randy Briers and Bernice of Anderson, Gary Briers and Sandra of College Station, Joanne Briers Isbell and Larry of Anderson, Beverly Briers Kahanek and Terry of El Campo, and Neal Briers and Alline of College Station. She had 16 grandchildren: James Briers (Migdalia), Wesley Briers (Kayla), Kevin Briers (Marcela), Angie Williams, Scott Briers (Dana), Leslie Fox (Leo), Gaye Lynn Currie (Larry), Holly Jo Batson (Jason), Cody Isbell, Larry Joe Isbell, Kathryn Anderson, James “Hugh” Robison, Kimberly Dunn (Craig), Joseph Briers (Chelsea), Dillon Briers (Rachel), and Erin Briers. She is survived also by 29 great-grandchildren and 6 great-great grandchildren, brother Robert Gabriel and sister-in-law Edele, and numerous other relatives and friends. Kathryn was preceded in death by her husband of 64 years, Joe Briers, in 2013, her parents, Phillip J. and Mary Magdalene “Maggie” (Martin) Gabriel and an older brother, Phillip Gabriel. The family extends special thanks to the physicians, nurses, and aides who so selflessly provided medical care to the family’s mother, grandmother, great grandmother, and great, great grandmother. Also, thanks for the services and coordination of Nobles Funeral Home, Navasota, Texas. In lieu of flowers, you may send memorials to St. Stanislaus Catholic Church Altar Society, Hospice Brazos Valley, Still Creek Ranch, or a charity of your choice.

Kathryn Ann (Gabriel) Briers of Anderson, TX, passed away on Tuesday, August 8, 2017. Visitation with the family will be held from 5 to 7 p.m. on Thursday, August 10, at St. Stanislaus Catholic Church, Anderson, TX, with a rosary to follow at... View Obituary & Service Information

The family of Mrs. Kathryn Ann Briers created this Life Tributes page to make it easy to share your memories.

Kathryn Ann (Gabriel) Briers of Anderson, TX, passed away on...

Send flowers to the Briers family.