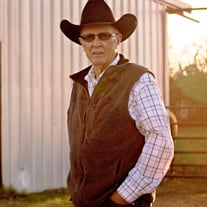 Mr. Kenneth Avery, 60 of Anderson passed away Wednesday, September 27th at Houston Methodist Hospital in Houston. A memorial service celebrating his life will be held at 11:00 am, Monday, October 2nd at the Knights of Columbus Hall in Hempstead, Texas. Rev. Gene Johnson will officiate. Arrangements are under the direction of Nobles Funeral Chapel. Kenneth was born in Hempstead, Texas on October 7, 1956 to Bobby and Betty Joyce (Hackemack) Avery. He attended school in Hempstead and graduated in 1975. A true cowboy and the last of a dying breed, Kenneth was a jokester at heart and loved kidding around, but when it got down to it, he could be counted on for an honest opinion whether it regarded livestock or life and you’d get the honest truth whether you wanted to hear it or not. From an early age, Kenneth felt most comfortable while saddled on a horse, whether roping for pleasure or in rodeo competition. He was a buyer for feeder cattle and in his spare time a horse trader, both of which he enjoyed immensely. On December 10, 2005, Kenneth married Laura Sopchak in Las Vegas, Nevada and they made their home near Roans Prairie, Texas. A few acres with his wife, horses, cattle and dogs made this cowboy happy. Diagnosed with Leukemia in 2013, Kenneth found himself in a heckuva fight, and one he fought valiantly before eventually succumbing to it. He is survived by his wife, Laura Avery of Anderson; son Kolby Avery and his fiancé Cacie Wagner of Anderson; sister Sharon Burger of Hempstead; nieces and nephews Cody Avery, Kasie Neel, Korie Smith and Austin Avery as well as several great nieces. He was preceded in death by his parents; brother Johnny Wayne Avery and brother-in-law Reese Burger. In lieu of flowers, please consider a memorial contribution in his name to The Kenneth Avery Memorial Fund; Citizens State Bank, P. O. Box 908, Navasota, TX 77868. You are invited to leave kind words and fond memories at www.noblesfuneral.com.

Mr. Kenneth Avery, 60 of Anderson passed away Wednesday, September 27th at Houston Methodist Hospital in Houston. A memorial service celebrating his life will be held at 11:00 am, Monday, October 2nd at the Knights of Columbus Hall in Hempstead,... View Obituary & Service Information

The family of Mr. Kenneth Avery created this Life Tributes page to make it easy to share your memories.

Send flowers to the Avery family.