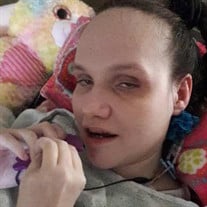 Krysten Lianne Sowell, 33, of Navasota, passed away Monday, March 22nd in Navasota from complications of Rett syndrome. Following an in-home visitation for family and friends, a graveside memorial service will be held at Pleasant Hill Cemetery in Carlos, TX at 2:00 PM on Wednesday, March 24th. Pastor Henry Sanders will preside. Arrangements are under the direction of Nobles Funeral Chapel. Krysten was born in Houston, TX on May 18, 1987. She was diagnosed at the age of 3 ½ with Batten disease, a progressive, degenerative neurological disorder. Her parents were told that she would only live to the age of 6 but may make it to 10 but would be in a vegetative state. However, Krysten decided to be the author of her own story and defied the odds year after year. She was a bright-eyed, wildly energetic little girl with a sparkly, bubbly and fun personality, and a smile that lit up the room. Although there were many things that she was never able to do, she did learn to play Super Mario Brothers on the original Nintendo game system. She would hold the controller upside down and hold down the “fast” button. She zipped through Level One like a BOSS, even knocking out the hidden things! If she wasn’t playing the game, she was chewing the controllers, and her parents had to continually go to Game Stop and stock up on used controllers by the hands full to keep her happy. Aside from Nintendo, Krysten’s favorite thing was watching TV. She went through many viewing obsessions during her lifetime, but the longest was probably Barney. She loved her Barney tapes and then later DVDs. In later years, she also accepted Steve Harvey, both on Family Feud and his morning show; The Golden Girls; and Hallmark movies. As the years passed, Krysten became wheelchair bound and slowly began to have more and more medical issues. In 2012, her digestive system failed and during the quest for solutions to keep her nourished and alive, it was determined that she had been misdiagnosed early on as DNA testing was not available at that time. Her neurological diagnosis was then changed to Rett syndrome, which has similar characteristics to that of Batten disease. Krysten was started on TPN, which is a source of nutrition that is administered via a central line that goes in the subclavian artery and runs to the heart where the TPN is dispersed and pumped through the bloodstream. In short, she ate through her heart! Ultimately, her body became unable to tolerate the TPN or to fight infections, so she was placed in hospice care at home where she was able to be comfortable until she made a peaceful transition to heaven surrounded by family at the age of 33, never entering a vegetative state. The family would like to express sincere appreciation to Dr. Russell Bacak (palliative care), Allumine Hospice, Marie Soliz and Richard Pinon for helping with Chance during Krysten’s many hospitalizations, and the many other family members and friends who made up the village that helped so much. Krysten is preceded in death by her maternal grandparents, Daniel Guinn-Shaver and Joann Taylor-Grant; paternal grandparents, Johnnie Lee Sowell and JoAnn Sowell; and her stepfather, Paul Pinon. Krysten is survived by her older brother, Jason Sowell (Taylor Greenwood), and their children Garett, Payton, Everleigh and Hudson Sowell; her younger brother, Justin Sowell and wife, Tiffany, and their children Parker and Tucker Sowell; her stepbrother, Chance Pinon; her mother, Gynti Pinon; and her father, Dana Sowell. She is also survived by many loving aunts, uncles, cousins, and family friends. The family will unite to actively participate in burying Krysten with a natural burial and celebration of her precious life. You are invited to leave kind words and fond memories at www.noblesfuneral.com.

Krysten Lianne Sowell, 33, of Navasota, passed away Monday, March 22nd in Navasota from complications of Rett syndrome. Following an in-home visitation for family and friends, a graveside memorial service will be held at Pleasant Hill Cemetery... View Obituary & Service Information

The family of Krysten Lianne Sowell created this Life Tributes page to make it easy to share your memories.

Send flowers to the Sowell family.