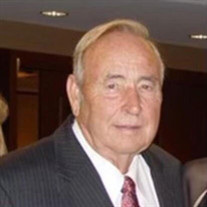 Mr. LE Murry, 86 of Anderson, passed away quietly on October 4, 2021 at St. Joseph’s Hospital in Navasota, TX. Visitation will be at 2:00 PM on Friday October 8th with funeral services following at 3:00 PM at Nobles Funeral Home, Navasota, TX. There will also be a visitation for family and friends at the Zion Hill Baptist Church, Hwy 167 in Williana, LA. on Monday, October 11th at 10:00 AM. Burial will be in the church cemetery following the visitation at 11:00 AM. LE was born on August 11, 1935 in Williana, LA. to Denver Lee and Lucille (Slater) Murry, the oldest of 9 children. emailAfter graduating from high school in Dry Prong, LA. LE worked for the railroad and then joined the U.S. Army. He was stationed in Germany for 4 years. After being discharged from the Army and having been trained in radar instrumentation, LE worked for several Oil and Gas companies such as Honeywell, Westinghouse, Cameron Iron Works, Aramco and Saudi Aramco in Saudi Arabia in electrical instrumentation. After living in Saudi Arabia and working for Saudi Aramco for 12 years, LE retired to ranch in Grimes County TX. There he raised Boer goats, Ostrich, Emu and cattle on his 100 acre ranch. At the same time he also worked for Aquilla Gas Company as the plant manager at the Holland Creek Plant in Anderson, TX. In LE’s spare day time hours, you would always find him with many of his retired buddies playing dominoes. If he wasn’t playing dominoes and the weather was right, he would be working up his garden with his tractor and cultivator to plant a large crop of watermelon and cantaloupe. Night time hours found LE & Sharon going out to eat, visiting friends in TX and LA., going to the casino or visiting with Sharon’s children and grandchildren. LE had many friends in Texas and enjoyed getting together with them for a cold beer. He was a good man and would give you the shirt off his back and then buy you a beer. He will be missed. He is survived by his wife of 24 years Sharon (Burge) Murry, brothers WD (Paulette) Murry, Clayton (Linda) Murry, Sisters Lane (Floyd) Chelette and Carol Sue (Quincy) Carter. Sharon’s children, daughter Terri (Dennis) Jannusch, Son Steve (Lee) Roepke, Granddaughter Andrea Roepke and Great Granddaughter Hadley, Grandson Taylor (Emmalee) Roepke and Great Granddaughter Georgia. He leaves behind many nieces and nephews in Texas and Louisiana. He was preceded in death by his parents Denver and Lucille, brothers Charles Ray, Jimmy, Bobby and Wayne. Pallbearers in LA. will be: Scott Carter, Lynn Chelette, Rodee Carter, Johnathon Walenta, and Buddy Norton. Honorary Pallbearers are: Jim Westmoreland, Bill Konecny, Doug Thompson, Donnie Yargo, Steve Roepke and Terri Jannusch. In lieu of flowers, you are requested to make a Tribute Gift to The Parkinsons Foundation at Parkinson.org

The family of Mr. L E Murry created this Life Tributes page to make it easy to share your memories.

Mr. LE Murry, 86 of Anderson, passed away quietly on October...

Send flowers to the Murry family.