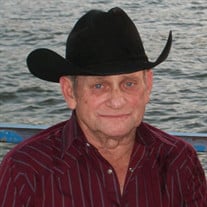 Mr. Larry Owen Pearson, 71 of Navasota, passed away Friday, December 29th at CHI St. Joseph Regional Healthcare Center in Bryan, Texas. Visitation with family and friends will be held from 5:00 – 7:00pm, Thursday, January 4th at Nobles Funeral Chapel, with a celebration of his life to begin at 2:00pm, Friday, January 5th, also at the funeral home with interment to follow in Plantersville Cemetery. Arrangements are entrusted to Nobles Funeral Chapel. Larry was born September 5, 1946 in Bastrop, Texas. He married Wanda Murchison in San Antonio on March 21, 1965 and together they had three children. Larry spent his life providing for his family in the field of contstruction, namely underground utlities. He loved heavy equipment, backhoes, graders, maintainers, front end loaders…. and could do just about anything on them, building roads, ditches, livestock ponds, utility trenches… if it could be moved or excavated with a piece of equipment, he was the man to call. Larry was a die-hard cowboy, schooled in the lost art of manners, respect, the honesty of a handshake and giving you his word. He was an accomplished calf roper. He and his quarterhorse, Son, participated locally for years. Son loyally road the circuit with Larry and died at the ripe age of 36. Anyone who knew Larry knew there were two things that could be found in the cooler in the back of his truck… cold milk and cold beer. He was as quick with a smile as he was with a rope, and he loved his family immensely. To cherish the legacy he left behind are his beloved wife of over 50 years, Wanda Pearson; daughters and sons-in-law Tammi Pearson and Scott Cole and Shelly and Cody Kane; sister and brother-in-law, Anita “Doodle” and Tommy Farr; brother Roger Pearson; grandchildren Tanner Briers and wife Sarah and Haley Briers and great-granchildren Reagan and Adayln Briers. He was preceded in death by his parents; son Nolan Pearson; faithful canine companion, Baby Girl and his beloved quarterhorse, Son. In lieu of flowers, the family suggests that memorial contributions be made in Larry’s name to Lone Star Cowboy Church, 21627 Eva Street, Montgomery, Texas 77356 so that a deserving child(ren) may attend Biblical Camp. You are invited to share fond memories and kind words at www.noblesfuneral.com.

The family of Mr. Larry Owen Pearson created this Life Tributes page to make it easy to share your memories.

Send flowers to the Pearson family.