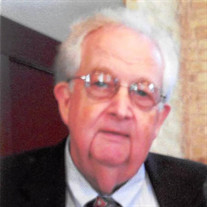 Larry Carter Tinney passed away Monday, April 20, 2020 at his home in Navasota, Texas. He was 76 years old. The youngest of four siblings, he was born September 4, 1943 in Houston, Texas to David Ralph Tinney and Alice (Carter) Tinney. He grew up in the Heights Area of Houston, graduating from Spring Branch High School. The following year while a freshman year at Lon Morris College he met the love of his life, Frances Jane Stokely. The couple married in Houston on July 24, 1964. Initially, he planned to continue his studies at the University of Houston, but the army had other plans and he was drafted into military service before he could register for classes. Nevertheless, served his country with distinction, completing Basic Training at Fort Polk Louisiana before being selected for Officer Candidate School from which he graduated a Second Lieutenant in the United States Army. He proudly served with the Army’s Third Armored Division in Germany. In 1969 he was honorably discharged at the rank of First Lieutenant. Afterwards, he and Frances Jane started their family in Houston. Larry began working for a major food company and later was transferred to the Dallas-Ft. Worth metroplex where he continued what would become a forty-year stint as an executive in food marketing and sales. After the children were raised, he retired to the family farm in Navasota, and spent the remainder of his life ranching. Larry loved people. He was big-hearted, tolerant, and generous. He was a prolific storyteller with a knack for detail. He was calm under pressure, but always ready with a quip or saying that revealed an endearing sense of humor and a light touch with people. He had a unique charisma and ability to see solutions to problems - large or small. He paid close attention to details that mattered, and looked for opportunities to connect challenges to life lessons with no small amount of humor. He enjoyed ranching, driving his John Deere tractor and spectator sports with a special place in his heart reserved for the Navasota High girls’ basketball team. He is remembered by his family and friends as a gentle man who possessed a strong sense of personal responsibility, loyalty, steadfastness, and plain-spokenness. He will be missed. He was preceded in death by his parents; sister Billie Joyce Dodgen; brother David Ralph Tinney, Jr. “Bo”; nephew Craig Allen Dodgen; father-in-law William P. Stokely (“Bill”) and mother-in-law Mary Frances (Noblitt) Stokely. Surviving family members include his loving wife of 55 years, Frances Jane (Stokely) Tinney; two sons, Devin Andrew Tinney and David Stokely Tinney; and four grandchildren, Raeanna, Carter Stokely, David Andrew, and Hannah. He is also survived by a sister, Anne Carlile and her husband Jim; along with many nieces, nephews, and cousins. Larry’s request to be cremated allows the family to postpone the burial in Fields’ Store Cemetery in Waller, Texas, and the memorial service until after the Covid-19 pandemic quarantine. Arrangements are under the direction of Nobles Funeral Chapel. In lieu of flowers the family requests that mourners make a donation to The Crohns & Colitis Foundation – an ailment from which he suffered most of his adult life – at crohnscolitisfoundation.org. You are invited to leave kind words and fond memories at www.noblesfuneral.com.

Larry Carter Tinney passed away Monday, April 20, 2020 at his home in Navasota, Texas. He was 76 years old. The youngest of four siblings, he was born September 4, 1943 in Houston, Texas to David Ralph Tinney and Alice (Carter) Tinney. He... View Obituary & Service Information

The family of Mr. Larry Carter Tinney created this Life Tributes page to make it easy to share your memories.

Send flowers to the Tinney family.