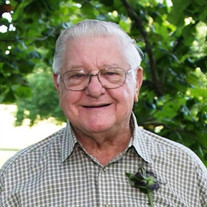 Mr. Leroy D. Klump, 95 of Navasota, passed away Thursday, October 1st at Baylor Scott & White in Brenham, Texas. Visitation with family and friends will be held from 5:00 – 7:00 pm, Monday, October 5th at Nobles Funeral Chapel in Navasota. A celebration of his life will be at 2:00 pm Tuesday, October 6th, also at the funeral home with interment following in Prairie Lea Cemetery in Brenham. Rev. C. McAllister “Mac” Vaughn will officiate. Arrangements are under the direction of Nobles Funeral Chapel. Mr. Klump was born in Washington County on February 7, 1925 to Hugo and Martha (Liescheski) Klump. He graduated from Brenham High School, worked at the shipyards in Orange, Texas and then proudly served his country in the United States Army. He attended Blinn College, Southern Methodist University and then the University of Texas, completing his education as a licensed pharmacist. He married Madeline Mondrofsky in Washington County on July 1, 1950 and together they raised three children. Throughout his career, Leroy was a pharmacist in Brenham, LaGrange and Navasota. He was a life member of the University of Texas College of Pharmacy Alumni Association, the American Legion, American Pharmaceutical Association, Texas Pharmaceutical Association and served as president for the Brazos Valley Pharmaceutical Association. He also served as a Scout Master for Boy Scout Troop 361 of Navasota. Leroy was an avid stamp collector and a member of the American Philatelic Society, the worlds largest non-profit stamp collecting foundation. He also enjoyed gardening, reading and solving jig-saw puzzles. He is survived by son and daughter-in-law, Craig and Kristie Klump of Georgetown; daughters and sons-in-law Becky and Sam Watson of Navasota and Bonnie and Gary Hartstack of Washington; sister-in-law Gladys Mondrofsky of Brenham; grandchildren Cori Herzog and husband Brian, Brooke Jensen and husband Jared, Erin Dierking and husband Trent, Ashley Klump, Michaela Moore and husband Kyle and Austin Klump and great-grandchildren Blake and Hailey Herzog, Paige and Madison Jensen, Grace Dierking, Felicity Moore and Genevieve Moore. Serving as pallbearers are Austin Klump, Blake Herzog, Brian Herzog, Jared Jesen, Trent Dierking and Kyle Moore. Mr. Klump was preceded in death by his parents; wife Madeline Klump and brother, Raymond Klump. In lieu of flowers, the family suggests that a memorial contribution in his name be made to the Alzeimers Association at www.act.alz.org or by mail at 2242 West Holcombe Boulevard, Houston, Texas 77030. You are invited to leave kind words and fond memories at www.noblesfuneral.com.

The family of Mr. Leroy D. Klump created this Life Tributes page to make it easy to share your memories.

Send flowers to the Klump family.