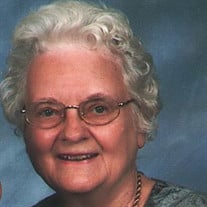 Lessie Rene (Boggan) Dedmon, age 91, of Navasota, Texas passed away on Friday, February 3, 2017 at College Station Medical Center while surrounded by family. She was born on September 29, 1925 in Sweetwater, Texas. She moved all over Texas as a child while her father worked on the railroad. In 1943, she graduated from Milano High School in Milano, Texas. On July 3, 1946, at the age of 20, Lessie Rene married Thomas “Benton” Dedmon in Hearne, Texas and they have remained married for over 70 years. The couple lived in Navasota their entire marriage and had 2 children, Bennie Renea (Dedmon) Nobles and Thomas Benton “Tommie” Dedmon, Jr. Lessie Rene and Benton joined First Baptist Church of Navasota in March of 1953 and they were very involved for many years. Lessie Rene’s passion at the church was working in the nursery and she was very proud to tell you that she did so for over 27 years. Some of her favorite hobbies included sewing and crocheting blankets which she shared with many. Lessie Rene also loved helping the elderly while volunteering at the nursing home where she made lots of friends who would later care for her during her 8 year stay. Although Alzheimer’s Disease stole the last years of her life, we are comforted in knowing that Jesus is the ultimate healer and Alzheimer’s does not exist in heaven. She will be dearly missed by all. Lessie Rene is preceded in death by her parents, Frank and Susie (Holland) Boggan; her son Tommie; brother Vester Boggan and sister-in-law Carrie; and sister Winnie Belle (Boggan) Moore and brother-in-law Pleas. She is survived by her husband of 70 years, Benton; daughter Bennie Renea (Dedmon) and husband Marcus Nobles of Deer Park, Texas; 3 grandchildren Philip Pratt, Jr. and wife Tammi of Navasota, Cassie (Pratt) Pullig and husband Scott of Deer Park, and Trista Dedmon of Seattle, Washington; and 4 great-grandchildren Brandon Pullig, Dylan Pullig, William Pratt and Dillon Schulz. She is also survived by many nieces and nephews. Visitation and funeral services will be held on Wednesday, February 8, 2017, at Nobles Funeral Chapel in Navasota. Visitation with the family will begin at 9 am with a service to follow at 11 am. Interment will immediately follow the service at Oakland Cemetery in Navasota. Rev. Clyde Larrabee will officiate. In lieu of flowers, donations may be made to First Baptist Church of Navasota or the Alzheimer’s Association at alz.org. You are invited to leave kind words or fond memories at www.noblesfuneral.com.

Lessie Rene (Boggan) Dedmon, age 91, of Navasota, Texas passed away on Friday, February 3, 2017 at College Station Medical Center while surrounded by family. She was born on September 29, 1925 in Sweetwater, Texas. She moved all over Texas... View Obituary & Service Information

The family of Mrs. Lessie Dedmon created this Life Tributes page to make it easy to share your memories.

Send flowers to the Dedmon family.