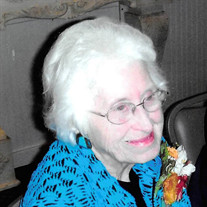 Mrs. Lila Leea Steen, 92 of Singleton and Navasota, passed away peacefully in her sleep in Houston, Texas on September 25th. A short memorial service celebrating her life will be held at 2:00pm, Saturday, October 28th at Nobles Funeral Chapel. Arrangements are under the direction of Nobles Funeral Chapel. Lila was born February 4, 1925 in Murray, Utah to Lawrence and Harriet (Dorton) Leea. She graduated high school and attended college for two years. She married William “Bill” Eugene Steen in Salt Lake City, Utah on May 28, 1945 and together they had two children. Lila worked as a legal secretary, first in Salt Lake City and later in Houston. In 1975, they relocated to the Singleton, Texas community and Bill hung his shingle on a small legal practice in Anderson where Lila assisted him until their retirement. Lila was very active in the county and volunteered her time to a number of organizations, including the Grimes St. Joseph Hospital, R.S.V.P., VFW Post 4006 Ladies Auxiliary, AARP, and the League of Women Voters. For a number of years, she chaired the Grimes County Democrats, and was the senior advisor for the Democratic Party Precinct #17. She also served as a volunteer on the state level of the VFW. Mrs. Steen is survived by her daughter and son-in-law, Karen and Ralph Moorhouse of Houston; granddaughters Susan Leiber and husband Kenneth of Ft. Worth, Nico Steen-Bell and husband Mike of Houston, Shawna Hobbs and husband Dierke of Houston and Farah Murray and husband Lionel of California; daughter-in-law Carol Steen of New York City, NY, niece Diana Slaugh and nephew Michael Matthews, both of Salt Lake City, UT and several great-grandchildren. She was preceded in death by her parents, husband Bill, son William J. Steen, grandson Clint Murray and brother Earl Matthews. In lieu of flowers, the family asks that you consider a memorable contribution in her name to the Alzheimers Association, 225 N. Michigan Avenue, Floor 17, Chicago, Illinois 60601 or www.alz.org. You are invited to leave kind words and fond memories at www.noblesfuneral.com.

Mrs. Lila Leea Steen, 92 of Singleton and Navasota, passed away peacefully in her sleep in Houston, Texas on September 25th. A short memorial service celebrating her life will be held at 2:00pm, Saturday, October 28th at Nobles Funeral Chapel.... View Obituary & Service Information

The family of Mrs. Lila Steen created this Life Tributes page to make it easy to share your memories.

Mrs. Lila Leea Steen, 92 of Singleton and Navasota, passed away...

Send flowers to the Steen family.