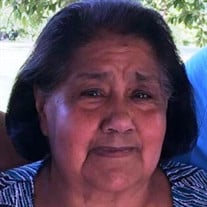 Lupe Flores Rangel, 78, of Bryan, passed away Thursday, July 8, at CHI St. Joseph Regional Health Center. Visitation with family and friends will be Thursday, July 15, from 5:00 – 7:00 PM at Nobles Funeral Chapel with a parish rosary following at 7:00 PM. Funeral services will be held Friday, July 16, at 10:00 AM at the funeral home with interment following in Oakland Cemetery. Arrangements are under the direction of Nobles Funeral Chapel. Lupe was born in Navasota on December 7, 1942, to Florentine and Mary (Davilla) Flores. Being the oldest of 10 siblings, from an early age Lupe took on the role of a caregiver. It would become a selfless title that she continued to carry her entire life, always putting others before herself. She began to build her family having three sons and two daughters of her own. Throughout her life, Lupe served her community well working at some of Navasota’s staple businesses including Lindley’s Cleaners and Carroll’s Giant Burger. Most of her career was spent servicing the community at Harlan’s Food Market where she connected with every patron who walked through the sliding doors. For forty plus years, she greeted everyone with a smile, called everyone by name, and her check-out line was often long because everyone wanted their groceries to be handled by Lupe. Her simple joys of life included going dancing, cooking and baking, thrift shopping, being an avid book reader, and cultivating her green thumb by collecting as many plants as possible. Yet Lupe’s greatest joy of all, was loving and taking care of her family. She was a devoted mother, endearing grandmother, and remarkable sister -- a true matriarch of her family. Lupe lived a beautiful life to the fullest, and she will be dearly missed by all her family and friends. She was preceded in death by her parents; son Michael Dobijanski; brothers, Florentine Flores, Jr. and David Flores; and sister Rosie Flores. Lupe is survived by sons, Edward Dobijanski (Lori) of Navasota, Andrew Dobijanski (Malinda) of Navasota; daughters, Mary Jane Rios (Jerry) of Navasota, Maria Gallegos (Robert) of Bryan; brothers, John Flores (Modesta) of Navasota, Pete Flores (Hilda) of Hearne; sisters, Margaret Manrique of Tomball, Mary Ann Westfall (Allen) of Navasota, Sylvia Teran (Eladio) of Bryan, and Linda Espiriqueta (Daniel) of Bryan; 9 grandchildren and 2 great-grandchildren. Serving as pallbearers are Robert Gallegos, Jerry Rios, Colson Hildreth, Landyn Dobijanski, John Michael Flores, Paul Flores, Manuel Luna, and Miguel Flores. Honorary pallbearers are Edward Dobijanski, Michael Flores, Andrew Dobijanski, Keegan Campbell, John Flores, Jaime Garcia, Pete Flores, Ray Manrique, Jr., Allen Westfall, Michael Dobijanski, and Bianca Gallegos. The family invites you to leave kind words or fond memories at www.noblesfuneral.com.

The family of Lupe Flores Rangel created this Life Tributes page to make it easy to share your memories.

Send flowers to the Rangel family.