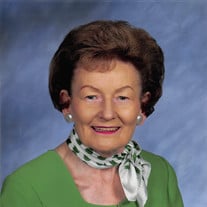 Mrs. Marguerite Greer DiIorio, 93 of Navasota passed away Thursday, October 5th at Navasota Nursing and Rehab. Visitation with family and friends will be held from 9:00 - 11:00am, Tuesday, October 10th at Nobles Funeral Chapel with a celebration of her life immediately following at 11:00am. Rev. C. McAllister "Mac" Vaughn and Rev. Jeremy Woodley will officiate. Interment will follow in Oakland Cemetery. Arrangements are under the direction of Nobles Funeral Chapel. Marguerite was born in Iola, Texas on March 15, 1924 to William and Clarissa (Stuckey) Greer. Following high school, she attended and obtained her BBA from Sam Houston State University in Huntsville. She married Mike DiIorio and worked as a secretary in the oil industry for the majority of her career years while living in Houston, Shreveport and Tyler. After Marguerite and Mike moved back to Houston, she was a secretary-receptionist at First United Methodist Church of Houston until she retired. Upon retirement, they moved to Navasota and Marguerite became an active member of Navasota First United Methodist Church. She served on the Administrative Board at First Methodist Church in both Houston and Navasota. As a memorial to her husband and family, Marguerite was responsible for providing a Youth/Family Center at First United Methodist Church in Navasota. She was also active in the Navasota Garden Club and the Music Study Club, serving as past president in each. In Tyler, she and her husband worked with the youth at Glenwood United Methodist Church where they helped the College Sunday School Class establish a small prayer chapel at the church. She also served as past president of the Tyler Opt-Mrs Club and the Tyler Desk and Derrick Club. In 2009, she was named Citizen of the Year by the Navasota/Grimes County Chamber of Commerce. Marguerite loved to travel, and one of her favorite trips was one she and her husband took to the Holy Land with a group from the church. She enjoyed decorating at Christmas for the young children in the neighborhood. There was a large nativity scene placed in her yard. In addition, Santa would be in charge of an antique surrey loaded with gift packages. Wherever she lived, Marguerite was always active in her church and community. Mrs. DiIorio is survived by cousins Jack Walker of Bryan, Ruby Stuckey of Anderson, Dorothy Baker of Houston, Doyle Stuckey and wife Edloe of Houston, Bettye Francis and husband Bob of Albuquerque, NM, Joy Lee Gilmer and husband Kyle of Arlington; nephews Kelly Younger and wife Linda, Larry DiIorio, Joe DiIorio and wife Barbara, and Dr. Patrick DiIorio and wife Elizabeth. She was preceded in death by her parents, husband Mike A. DiIorio, sisters Loris Greer Rausch and Willie Mae Greer Knight. The family would like to thank Dr. Luke Scamardo, Navavsota Nursing and Rehab, Traditions Hospice and a special thanks to Debra Matthews, Mrs. DiIorio's caregiver. In lieu of flowers, a memorial contribution in her memory may be made to First United Methodist Church, 616 Holland Street, Navasota, TX 77868. You are invited to leave kind words and fond memories at www.noblesfuneral.com.

Mrs. Marguerite Greer DiIorio, 93 of Navasota passed away Thursday, October 5th at Navasota Nursing and Rehab. Visitation with family and friends will be held from 9:00 - 11:00am, Tuesday, October 10th at Nobles Funeral Chapel with a celebration... View Obituary & Service Information

The family of Mrs. Marguerite Greer Dilorio created this Life Tributes page to make it easy to share your memories.

Send flowers to the Dilorio family.