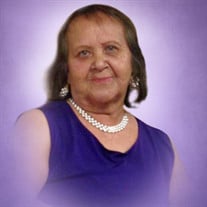 Mrs. Maria Lou (Flores) Loera, 67 of Navasota passed away Wednesday, September 26th at Hospice Brazos Valley Inpatient Facility in Bryan, TX. Visitation with family and friends will be held from 1:00pm until 4:00pm, Sunday, September 30th at Nobles Funeral Chapel, followed by a rosary at 4:00pm. Funeral Services will be held at 10:00am, Monday, October 1st at Christ Our Light Catholic Church followed by the Rite of Committal in Oakland Cemetery. Deacon Ted Baker will officiate. Arrangements are under the direction of Nobles Funeral Chapel. Maria was born in Edinburg, Texas on July 31, 1952 to Adam and Natividad Flores. She married Ramon Loera and together they had three children. Maria enjoyed cooking and she put those skills to use throughout her life working in the school cafeteria. Caring for others was in her nature, and she was the primary caregiver for her husband, brother and sister throughout their longterm illnesses. She took great pride in her flower and vegetable gardens and spent countless hours at her sewing machine. She could sew just about anything, but she especially enjoyed creating quilts. Maria was happiest when surrounded by her family, particularly the grandchildren. Mrs. Loera is survived by her daughter and son-in law Nelda and Timothy Rodriguez of Navasota; son and daughter-in-law Ramon, Jr., and Erica Loera of Texarkana; sisters and brother-in-law Isabel and Isreal Santoy of Edinburg and Jose Flores of Salem, Oregon; sisters-in-law Mary Ann Flores and Lidia Flores; eight grandchildren and three great-grandchildren. She was preceded in death by her parents; husband Ramon Loera; brothers Orailo, Adam, Pedro and Richard Flores; sister Dora Flores and son David Loera. Serving as pallbearers are Henry Flores, Eugene Castillo, Armando Flores, Abel Castillo, Rosalio Rocco, and Aaron Musgrove. You are invited to leave kind words and fond memories at www.noblesfuneral.com.

The family of Mrs. Maria Lou Loera created this Life Tributes page to make it easy to share your memories.

Send flowers to the Loera family.