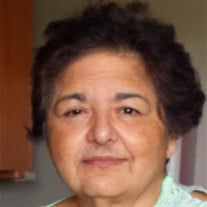 Marie “Elaine” Walker, 69, of Navasota passed away Sunday, August 27th at CHI St. Joseph Regional Hospital in Bryan, Texas. Visitation with family and friends will be from 5:00 – 7:00pm, Thursday, August 31st at Nobles Funeral Chapel. A celebration of her life will be at 12:00 noon, Friday, September 1st also at the funeral home. Rev. Henry Sanders will officiate. Interment will be in Oakland Cemetery. Arrangements are under the direction of Nobles Funeral Chapel. Elaine was born in Navasota, Texas on January 13, 1948 to Albert and Frances (Rodriguez) Garza. She attended Navasota High School and shortly after graduation she married Walter Walker. She worked in retail sales most of her life, and retired from the College Station Wal-mart nine years ago after heart surgery. Two years later, her health would throw her yet another curveball and due to poor circulation, a necessary amputation was performed on one of her legs. Remaining very active in spite of her health and physical limitations, Elaine enjoyed trips to the casinos in Louisiana, cooking and baking (she made the best dewberry cobbler!) and admiring the beautiful flowers in her yard. Elaine was a generous, caring woman who made friends easily. She and her furbaby, a Yorkshire Terrier named Prince who was forever by her side, enjoyed watching her soap operas and the Price is Right. Elaine is survived by sisters Dolores Medina and Rita Zaragoza; brothers-in-law and sister-in-law Bobby and Ollie Walker and Maxie Ward and her canine companion, Prince. Serving as pallbearers are Alex Zaragoza, Alex Zaragoza, Jr., David Zaragoza, Matthew Perry, Michael Flores and Matthew Zaragoza. She was preceded in death by her parents, husband Walter Walker, aunt and uncle Manuel and Theresa Guiterrez and sister-in-law, Shirley Ward. You are invited to leave kind words and fond memories at www.noblesfuneral.com.

The family of Marie "Elaine" Walker created this Life Tributes page to make it easy to share your memories.

Send flowers to the Walker family.