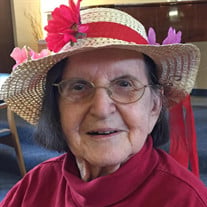 Marie Love Nickle died on Tuesday, August 11, 2020 in Brenham, Texas, within three months of the death of her husband of 60 years, Keith. The elder child of Adeline and Raymond Love, Sr., she was born on September 30, 1933 in Bryan, Texas, living from infancy in Navasota where her father owned Love’s Supermarket. The birth of her brother, Raymond, Jr., when she was twelve rounded out her close-knit family. After graduating Navasota High School and Southern Methodist University, Marie married high school sweetheart Neely Keyser, a Texas A&M graduate commissioned in the US Army Air Corps. A son was born to their union; however, Marie was widowed when her young husband died tragically in a flight accident in Germany in early 1958. Returning to Navasota, where the Presbyterian manse was right next door to her parents’ home on Church Street, she met and married the new Presbyterian minister, Keith Nickle, in 1960 and departed for Switzerland and Keith’s graduate studies. Three more sons completed their family, as they returned to homes in Texas, Missouri, Georgia, Tennessee, and Pennsylvania. Together they launched into life, exploring the world and their capacities in it, not the least adventurous of which capacities was raising their four sons. They dove into community in distinctive but connected ways, such that it is hard to envision one without the other. Marie’s social skills were a welcome compliment to Keith, who was frequently at a loss for parishioners’ or students’ names! Marie’s voracious curiosity about the life stories of others, and her native friendliness made her distinctive expression of hospitality as easy for her as it was enjoyable. Never one to sit around the house, Marie exercised her business education not only in the adept management of the family household and a seemingly endless list of projects and hobbies, but also in several administrative roles in the community as well as her own home based initiatives. Above all, Marie loved powerfully and loyally her family, friends, and community, underscoring her desire to be a resource and a support for our flourishing, with the consistent expectation that we might have fun along the way! Reunited in death with her husband, Keith, Marie is missed by their sons and spouses, Neely and Jeanie, Stephen and Catherine, John and Heather, Thomas and Eun Ha; and by seven grandchildren and two great-grandchildren. The family requests that memorial gifts be directed to the Nacoochee Presbyterian Church in Sautee-Nacoochee, Georgia, OR to an initiative about which the giver is passionate.

Marie Love Nickle died on Tuesday, August 11, 2020 in Brenham, Texas, within three months of the death of her husband of 60 years, Keith. The elder child of Adeline and Raymond Love, Sr., she was born on September 30, 1933 in Bryan, Texas, living... View Obituary & Service Information

The family of Mrs. Marie Love Nickle created this Life Tributes page to make it easy to share your memories.

Send flowers to the Nickle family.